On the plane ride home from Computex 2015 I asked myself a simple question.  “Was Computex worth it?”  You see I have been attending the Computex show for the past thirteen years.  I missed years 2005 and 2006 but Computex has been a yearly trek for me since 2003 and I have seen the show transform from something initially sales focused and market driven to a fashion show where flash and pizzazz win out in the end.

So, was Computex worth it?  In a word, kinda.

Computex has always been a playground of new technology and hardware.  I have to admit it took me awhile to fully understand the trade show scene and there are parts I still don’t understand.  For instance my first Computex badges said “Buyer” because I didn’t know I could be “Media”.  That created quite a few issues since vendors treated the different badge types differently but I made due.

I also didn’t spend much time setting up meetings.  This is a trade show after all and vendors should be at their booths ready to show off products and answer questions.  Come to find out that is only half the story since many vendors elected to have both public and private sessions to weed out the riffraff.  For instance I remember always seeing limos with Gigabyte stickers on the side.  To this day I’m not 100% certain but, I suspect they were the VIP shuttle to take folks to wherever their private room was. 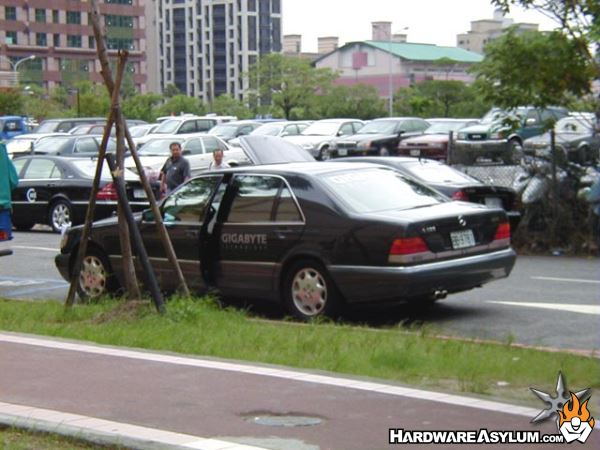 When I first started attending Computex there was no Nangang Exhibition Hall and everyone was either in Hall 1, Hall 2, Hall 3, the TICC (Taiwan International Convention Center) or Grand Hyatt.  Space during those times was at a premium so not only where the hallways rather narrow but the booths were smaller and often constructed of two levels.  This allowed vendors to have private meeting rooms and even gave employees a place to take a break. 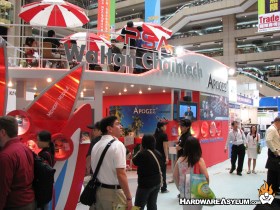 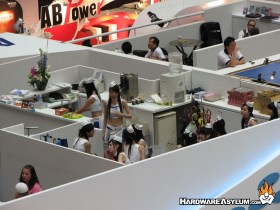 Even then the halls would be over crowded and actually made the show seem bigger than it really was due to increased foot traffic.  These days they say the show has gotten bigger however it is difficult to tell for a couple reasons.  First foot traffic is split between two locations the city and Nangang Hall always appears empty due to its size.

Why Attend a Trade Show?

There are five things I look to get out of any trade show experience.

The first reason is obvious, why go to a trade show if there isn’t anything new to see.  In the past, maybe 6+ years ago, companies made a concerted effort to have their new products available for Computex.  CMOS Reloaded stands out in my mind as a perfect Computex launch of a new technology that paved the way for what seems to be a common overclocking feature.  Many case manufacturers would release their fall designs at the show along with custom coolers and power supplies.  Motherboards and video cards launches have always been hit or miss depending on when ATI/AMD, Intel and Nvidia decided to release their chips.

When speculating a trade show, or guessing what will be shown, you will encounter three basic scenarios and I have seen them all.  The one we all want to see is the 0-Day hardware launch where Intel would announce a new product and the mfg would have a big press event.  After that everyone was good to show their products and the media was happy.  Another common launch is one that happens weeks before Computex complete with full product launches thus making the show completely moot.  The final and most annoying of the three is the complete polar opposite where a product launches late (after the show) and everything on display is exactly the same as it was the year previous.

Of course you cannot control what a chipmaker does and they tend to play their cards close to their chest in an attempt to stifle rumors and maintain any competitive advantage they may have.  The unfortunate side effect is what happens to the hardware media covering major events like this.  If there isn’t anything to write about then their effort was for nothing.

This brings me to something I don’t agree with.

Don’t get me wrong I realize that Journalistic integrity is dead.  It went away at the exact time when advertising dollars vaporized and hardware companies realized that they needed to show a return on investment (ROI).

However, with that being said a defining principle of hardware review sites is to remain impartial and provide unbiased reviews and it is up to the reader to decide if they agree.  Of course unbiased is a rather loose term and anytime there is a rival association people assume there is a hidden agenda and will discredit whatever is being said.

Herein lies the problem.  This year at Computex 2015 I noticed a good number of Tier 1 hardware websites in attendance, normal sites like Anandtech and Toms Hardware.  These sites tend to drive media speculation and it would be weird if they didn’t make an appearance.  I know there are a few exceptions but for the most part Tier 2 websites were not present at Computex.  Since Tiers can be interpreted differently I won’t include any names but will qualify it by saying large websites with localized editorial staff.  In this case it is safe to say many popular US based hardware sites didn’t bother coming to Computex and actually made a point NOT to mention it in their daily news.  Lastly we have Tier 3 websites and there were a good number of these in attendance.  I will be humble and say Hardware Asylum falls into this category along with a few others from around the world.

In addition to the normal hardware media websites a good number of YouTube channels made it to Computex this year and every one of them had their own agenda.  I mention this because YouTube is a growing segment in the hardware world and while the young hosts may not know what a PCI debug card is they do get most of their information from established hardware and news sites.

A Decline in Media Coverage

Given the distinct absence of a good number of hardware media at Computex I started asking my hardware partners why that was.  Come to find out when many sites setup their meetings they also setup a payment plan.  If the company doesn’t pay then they don’t visit the booth nor get an article.  When you think about it the arraignment is genius not only is the company guaranteed an article but the website helps offset their cost to attend a trade show.

Of course on the moral side of things they are now required to write something favorable about some hardware that might totally suck and stick to a schedule dictated by their editor that was determined by the highest bidder.  In reality it’s no different than creating a story based on a press release but at least you get paid meals.

I have always paid my way to Computex and I have done that for a couple reasons.  First, I never want to be obligated to write anything about anyone I meet at a trade show.  The intent here is that I write about what I see and what I think my readers would enjoy.  Truth is I see lots of really cool stuff and sometimes I run out of time.  Second, and maybe the most painful, is that the few times I did ask for “help” getting to (CES:Computex) I was turned down.  Likely because they know I’m going anyway so why spend the money.

Of course an interesting “exception” are the YouTube channels.  The three I know who attended Computex all did so with very prominent sponsorships and got maybe the most comfortable trade show experience ever.  Most simply did a vLog of what they saw at Computex and videos for their sponsors.  Read into that whatever you want.

You get out what you put in

I have said this many times, as a hardware editor and website owner you get out what you put in.  The difficult to part is when sites paid to be at an event get better coverage than the sites that genuinely want to be there.  These sites are looking to be included and what to make the most of the visit, they want the industry contacts and ultimately want their readers to be happy.

These are the people/sites that PR departments should be paying attention to and also the people they should be making happy.  Make it worth their time to be there, share the coverage they post and don’t get mad when a site says something negative because the PR department wasn’t doing their job.

It’s no wonder trade shows have transformed into a branding vehicle with no agenda.  If you look at the effort companies put into their booth you have to wonder what they are trying to accomplish.  Back in 2007 XFX spent considerable transforming their booth into a “Party RV” complete with a gaming room where you could play roulette for XFX prizes. 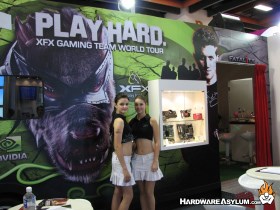 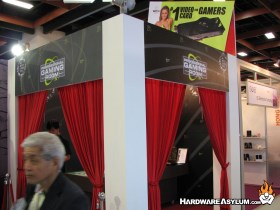 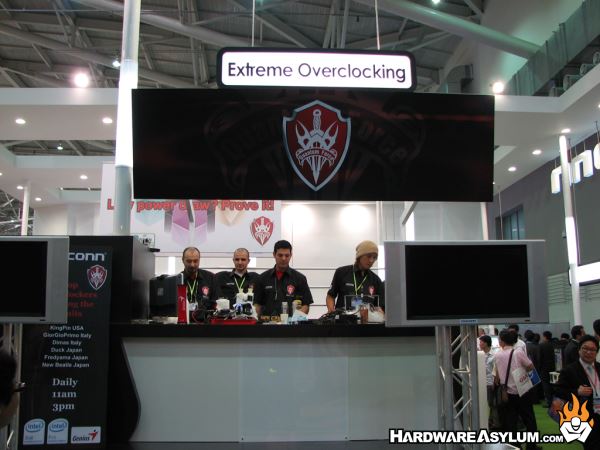 This is an example of a booth designed to attract attention and engage visitors.  These days Show Girls and Overclocking seem to be the draw and once the show if over people leave and nobody learned anything about the products they build.

Overall I still think Computex is relevant for a hardware review site even with the BS you can’t put a price on shaking someone’s hand and letting them know you are committed to what you do.  Of course looking back Computex was a good time and it will remain to be however from a business perspective of making new contacts and being guaranteed to see something new and exciting the relevance is gone.