There is something synonymous between floppy drives and retro computing and while most of you may associate a floppy disk with a save icon, I was slinging a Roguelike game across two DS/DD 360k 5.25” drives plus a ramdisk just to get to the lower levels when the save file got too large.  Well, storage has changed a lot over the years and while floppy disks are all but obsolete, they are still a key element in getting any Retro system running.

During a recent visit to Re-Pc in Seattle I picked up a couple of 3.5” Teac drives with black bezels.  These are for a future retro project and wanted to give them a good cleaning and functional inspection.  At the same time I pulled out my original Teac FD-55GFR 5.25” drive from storage to give it a clean along with a new(to me) FD-55GFR 5.25” drive that I picked up with a black bezel.

It was around that time I noticed that both of these drives were very different from each other. 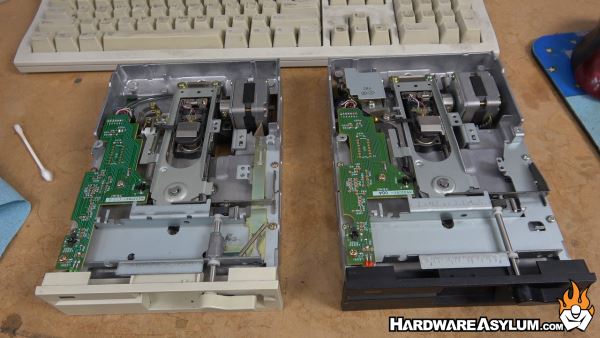 My original Teac drive featured an eject feature that not only prevented the drive from closing without a disk installed but also auto ejected the disk when you opened the drive.  The new drive had no eject feature but instead came with a solenoid that disengaged the head when the drive was not in use.  Having the heads disengaged is a great feature which can save your floppy disks during brown outs and the inevitable reboot.

There is an unwritten rule that you ALWAYS eject your floppy disks before rebooting or powering down your PC because there is a high chance that your disk will get corrupted.

In either case these differences in seemingly similar drives caught me off guard.  I was of the opinion that since my drive had an eject feature that ALL of the Teac drives would and yet when I searched the internet and available documentation, I found no mention of an eject feature and only a handful of references to a head load solenoid which leads me to believe that I somehow stumbled across two freaks of floppy drive nature. 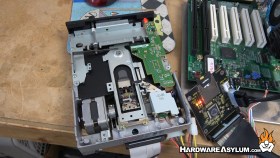 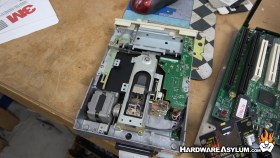 It also got me thinking about how Teac built and sold their FD-55 series.  Given that the drive frames are identical my conclusion is that Teac offered different drive configurations to customers depending on how the drive would be used.

This is slightly different from what you would expect as both of these “unique and rare” features make the drive better as a whole.  Granted the HLS makes a loud click every time you access the drive that goes a long way to save your disks and data from corruption.

Now I just need to find a drive with BOTH of these features and I'll be good.