I have attended a few overclocking competitions over the years and I can say without a doubt that watching a competition take place is very interesting and yet extremely boring.  My first experience was watching a live MOA (Master Overclocking Arena) qualifier that was held during CES in Las Vegas.  I was excited to be there and while most of my time was spent talking with friends the orchestration of the event was fun to watch.  Since then I have started paying more attention to the overclocking scene and watched how things have changed over the years, both for the good and the bad.

Recently HWBOT announced a new website aimed at transforming overclocking into a type of eSport with ladder rankings and regular competitions.  While this website is still in beta (as of this article) it got me thinking.

How do you transform a rather niche “hobby” into a fully fledged sport?

Traditional sports are usually centered on human endurance and can take place as competition between individuals or groups of individuals (teams).  A US centric example would be NASCAR racing or Monday night Football while on the worldwide stage it might be Golf, Soccer and F1 Racing.  Any way you look at it sports are about people followed by the tools they use to compete. 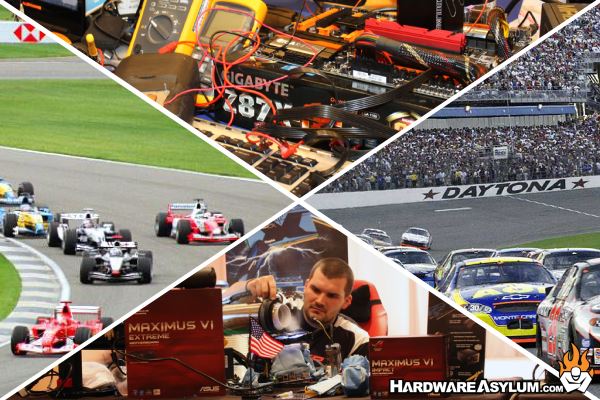 This brings up an interesting juxtaposition between playing a game and playing a sport.  Most would agree that American Football is a sport while Chess if often argued both for and against.  The same is true when it comes to video games.  For years it has been argued that playing video games professionally was just a job but, over the years the terms "eSport" and "CyberAthlete" have been used as a way to help justify why these players are bringing home six figure paychecks and get to travel around the world, just to play a game.

Under those assumptions overclocking could be a sport and have several things in place to help define overclocking and its players.  The first is ladder ranking and if we look at services like HWBOT and ORB (Futuremark) we can see overclocking scores from people all over the world.  We also have live competitions like the MSI MOA (Master Overclocking Arena) and HyperX HOT (HyperX OC Takeover) that will regularly crown winners and offer up prizes both in cash and hardware.

Unfortunately the format is incorrect and cannot accurately determine the skill of a player vs the quality of their gear.

HWBOT and ORB are sites founded on, and fueled by, Records.  Hardware Records for fastest score using X processor or Y video card and World Records which are the fastest scores overall.  Anything not counted as a record is basically a failed attempt at getting a record either by age (old score), inefficiency of the overclocker or bad hardware.  Current and past live overclocking competitions have also plagued by this where the winners were determined largely by the quality of their hardware and less on how they used it.

Online overclocking competitions have also become jaded over the years and between the cost of entry and constant complaints it is no wonder why participation has dwindled.  Solving the online issue will take some time and might be addressed in a future article.  However, I have a simple solution for live competition that will not only increase player interest but, make media coverage more exciting and finally create a real overclocking ocSport.

We need to remove “bin” from the equation.