EK-Quantum Velocity, the successor of the highly popular EK-Quantum Velocity, expands to Intel LGA 1200 socket. The water block showcases the EK-Matrix7 initiative, a standard where increments of 7mm manage the height of products and the distance between ports. This product uses a socket-specific cooling engine to ensure the best performance and optimal flow with low restrictions on every platform.

EK-Quantum Velocity D-RGB – 1200
This new water block kept the name “Velocity” because it retained the ability to be responsive and agile in the world of liquid cooling. Embedded in the Velocity is a next-generation EK CPU water block cooling engine that is socket-specific. A combination of mounting pressure and cold plate geometry, tailored for the IHS and die layout of Intel LGA 1200 socket processors, is used to achieve low hydraulic flow restriction and high performance. Th? lathe-turned cold plate is made with precision to cover the IHS effectively and put optimal pressure on the die area. 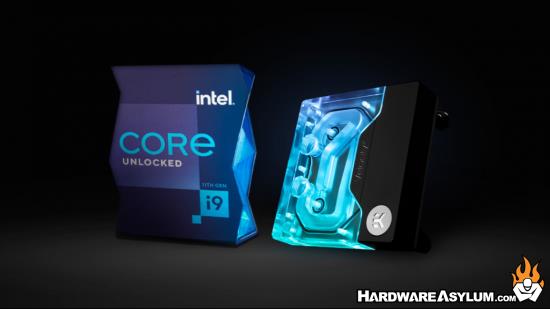 EK-Quantum Velocity was redesigned inside and out. A new, patent-pending EK-Exact Mount mounting system was developed in the search for an easy-to-use but aesthetically pleasing mounting mechanism. It’s made up of only three pieces – the backplate, mounting screws, and the water block itself. It’s screwed in from the back, allowing for a seamless and clean front aesthetic without any screws disrupting the harmony of shape. The system uses pre-tensioned springs concealed in the water block top, so with just a few turns of the thumb-nuts, the installation is finished, and you get the exact mounting pressure needed. 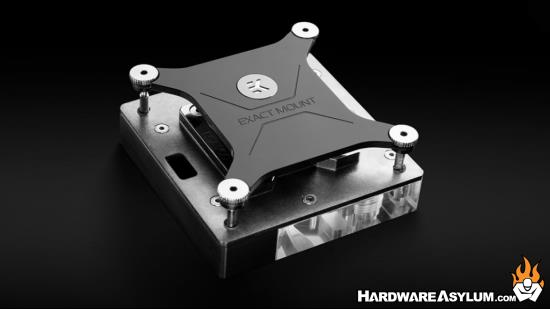 The LGA 1200 version made for Comet Lake and Rocket Lake CPUs comes in 5 variants:

These variations are based on aesthetics and have almost no impact on performance. The cold plate is manufactured out of the highest-grade 99.99% pure electrolytic copper, machined with precision for the best possible contact and heat transfer which is further nickel-plated, except with the Copper + Acetal version which uses a bare copper cold plate.

EK-Matrix7
The EK-Quantum Velocity is an EK-Matrix7 certified product. The EK-Matrix7 is a convenient product raster that adds a new dimension to PC liquid cooling, where increments of 7mm manage the height of products and the distance between ports. This improves product alignment and reduces the time spent planning the loop and bending tubes. Through the meticulous planning of our products, building a liquid-cooled PC becomes easy and fun, just like toy bricks.

D-RGB Compatibility
EK-Quantum Velocity D-RGB – 1200 CPU water blocks are equipped with 14 D-RGB LEDs. Models with the clear Acrylic top are entirely lit, while the solid-top options have sophisticated light beams cutting across them. They are compatible with all popular addressable RGB sync technologies from all major motherboard manufacturers. The arrow marking on the 3-pin D-RGB LED connector is aligned with the +5V marking on the addressable RGB header.

Availability and Pricing
The EK-Quantum Velocity series water blocks are made in Slovenia, Europe, and are available for pre-order through the EK Webshop and Partner Reseller Network.

Nickel + Plexi, Nickel + Acetal, and Copper Acetal models are expected to start shipping in late-February 2022, with the other models following in early March 2022.