When Sandy Bridge first launched there were wildly speculative forum posts discussing what motherboard would be best.  These threads often went into great detail about certain features based on previous designs and even how one brand might be better based on which fanboy had better connections.  While rumors will be rumors you couldn't help but notice how often the ASUS ROG name came up in conservation, and why not?  Asus is one of the premier builders in this industry with a strong brand recognition and even stronger fan base.

In this review we will be looking at the ASUS Republic of Gamers Maximus IV Extreme motherboard.  This is a P67 based board that currently shares the top of the line spot with the Maximus iV Extreme-Z.  Both motherboards share a similar design and, aside from the obvious chipset changes, should be almost identical.

We have often had the discussion, which Sandy Bridge chipset you should choose?  Do you pick the mature P67 or should you step up to the newer and feature rich Z68?  In terms of overall system performance you will be hard pressed to see a difference, especially when it comes to high-end offerings such as the Maximus IV Extreme. 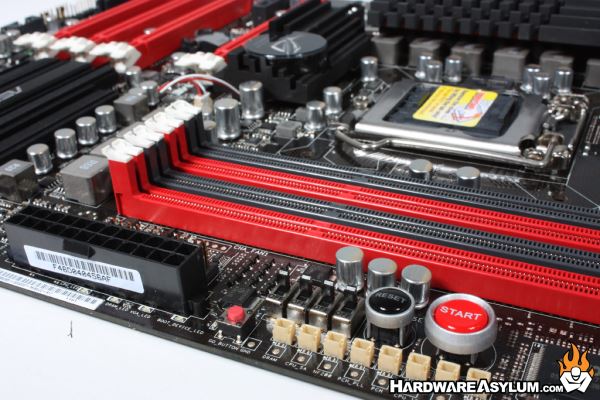 Community Supported
One benefit you get from any ROG product is rich community support at the ROG Forums.  These forums are a little different from the traditional enthusiast hangouts since they are moderated by real ASUS employees who often post lengthy guides to help you get the most from your system.

While we consider ourselves expert enthusiasts there are times when we hit the webby tubes for help, either to confirm our findings or get answers to a difficult problem.  In our case we had some questions as to why our 2600k was having stability issues above 4.8Ghz.  A quick search brought us to the ROG Forums where we found the answer in the Maximus IV Extreme BIOS and Overclocking guide.

The thing with enthusiast systems is that they are inherently confusing and while Sandy Bridge overclocking is basically the same from one board to another you cannot assume that board makers use the same settings, or even include them.  It is issues like this that make overclocking guides so helpful, even if they come directly from the factory.
Motherboards