Overclocking puts a unique strain on video cards and while reference design cards overclock rather well there is a limit to what the stock VRM can supply in terms of clean usable power.  These power demands go unnoticed under air and water cooling but overclocking under LN2 with voltage modifications and the weaknesses become evident.   For this reason many hardware enthusiasts look for cards with custom PCBs in hopes their overclocking experience will be better.  Another perk to custom designed videocards is that out of box performance is also considerably better since these cards often come with higher default clocks and better cooling systems.

In this review we will be looking at the EVGA GTX 980 Ti Classified.  Like in previous versions of the Classified the GTX 980 Ti has been matched up with the EVGA untouchables VRM to create a monster video card that can deliver outstanding out of box performance, enhanced overclocking and superior LN2 experience when matched with a custom unlocked BIOS. 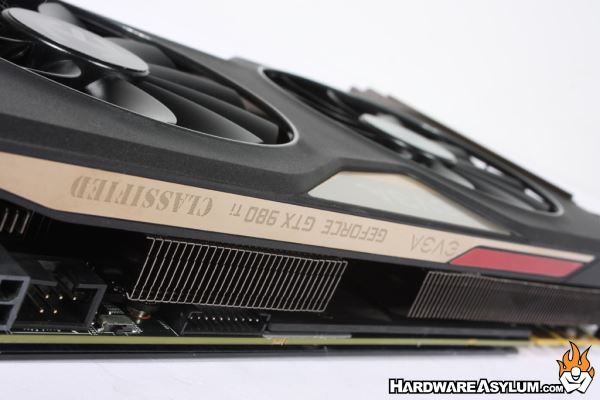 The GTX 980 Ti Maxwell GPU is based on the larger TitanX GPU core for a total of 2516 CUDA Cores and as we know more cores means more processing power, right?.  Match that with a 6144 Meg GDDR5 frame buffer and 384-bit memory interface and you have an amazing performance boost.  At least on paper.  Of course all of that theoretical performance is matched with the famed Base and Boost clock with a blistering 250W TDP.  With heat like that cooling performance will be instrumental in scaling the boost clock beyond the rated 1291Mhz.

Card specs are typical for a hot-clocked video card and while the VRM might be the only major difference the card has been upgraded with the new EVGA ACX 2.0 cooling solution.  ACX 2.0 features a straight heatpipe design with optimized Swept fan blades, double ball bearings and an extreme low power motor.  These things together allow the EVGA ACX 2.0 to deliver more air flow with less power and thus unlocking additional power for the GPU.