Specifically how to use Milk, Orange Juice and Sports drinks to cool your PC.

For as long as PC enthusiasts have been building water loops the question of "what liquid they should use" has been at the forefront.  Asetek said it best, Distilled Water.  That is by far the best fluid to use at least when it comes to heat capacity.

As we know things like algae growth and corrosion can be a problem when using pure water and is why we now have specialized fluids for our PC water loops.  You also shouldn’t be surprised that the primary ingredient of these coolants is distilled water due to its ability to store massive amounts of heat without a sharp rise in temperature.  It all has something to do with "specific heat" so I'll let you research that on your own.

The additives found in PC coolants are primarily designed as corrosion resistance and growth inhibitors.  Some fluids contain metals as to slow the leaching of metal from the components in your loop preventing corrosion and bio growth.  Other fluids contain glycol which not only prevents growth but also will protect against galvanic corrosion and will lower the freezing temperature.  The temperature drop isn't much but, it is a byproduct.  The glycol coolants are similar to what you’ll find in a car but in lower concentrations making them safe to use with PETG. 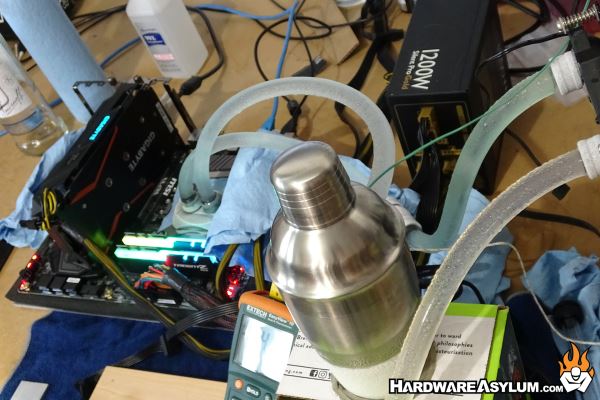 Of course I mention this because using "exotic" fluid(s) such as milk is not bad since it is mostly water and animal proteins, Orange juice is primarily water with citric acid and a sports drink is, again, mostly water with sugar.  None of these have enough additives to drastically change ambient cooling capacity because, they are mostly water and you are dealing with ambient temperatures. All the water is doing is carrying the heat from the source to the radiator so it can be dumped to atomsphere.

So, what would chnge if you used something like Vodka or Beer??  In terms of beer there will be no change, beer is mostly water with up to 10% alcohol depending on how dedicated you are with your beer selection.  However, with Vodka the formula changes a bit and NOT the direction you are thinking.  The loop will actually run hotter and require larger radiators to maintain the same cooling capacity that you would get with pure water.

That is, unless you change things up and take advantage of the unique properties of the fluid you are using.  In the case of Vodka it has a much lower freezing temperature.

For this project I decided to “change the formula” and do a little extreme watercooling at sub ambient temperatures.  To accomplish this I'm using straight 100 proof (50%) Vodka and a Single Stage Phase Chiller.  I also did a bit of overclocking running a Core i9 9900k @ 5.5Ghz sitting atop a MSI Z390 ACE.

In the video you’ll notice a few things.

Loop Temperature
First the phase head temperature was down to -30c but the loop temperature didn’t get below -3c during the overclocking runs.  The reason for this is twofold.  First I was running a "governor" on the phase head to prevent the secondary CPU block from getting too cold.  You can see a strip of aluminum when you look at the assembly and this soaked up some of the cold. I later removed it and was able to get the loop down to -15c at idle.

The other reason for the temperature change is surface area and flow,  Alcohol will absorb and release heat rather quickly and it simply wasn’t spending enough time in the phase block to remove enough of it.  Combine that with a higher loop temperature on the return from the CPU and you’ll never get below a certain temp.

Cloudy Coolant
Next you’ll notice that the Vodka got cloudy when it was cold, that is just something alcohol does due to the water in it.  It will also get thicker as the temperature drops making it more difficult to pump and was one of the issues with the loop.  The D5 is a powerful pump and it still could not pump enough pressure though the Aquacomputer Cuplex Kryos water block due to the microfin construction.  I should have used an older waterblock with a different fin array to get better flow and thus better temperatures.

Liquid Frost
If you look carefully you’ll notice a lot of frost and a lot of liquid water on the coolant loop.  During my overclocking runs the Vodka would get close to ambient as it left the CPU block and caused the tubes to sweat.  This dropped liquid water on the block which quickly turned to ice.

You’ll also notice that the metal fittings leaving the pump assembly were also devoid of ice all the way to the phase block.  This temperature change is mostly from the D5 pump.  A D5 is internally cooled meaning it dumps heat into the fluid it is pumping.  Combine that with extra stress from the chilled Vodka and it was simply dumping heat into the loop.  The CPU was putting out around 200w of heat running at 5.5Ghz and the D5 was just adding to that. 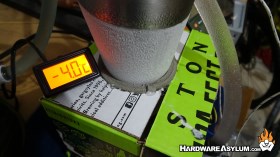 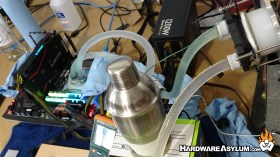 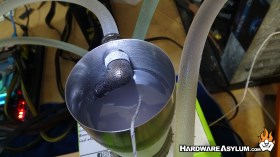 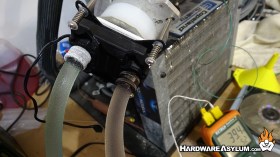 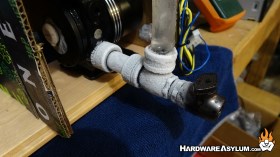 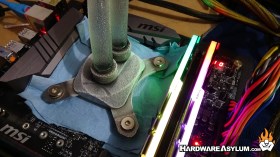 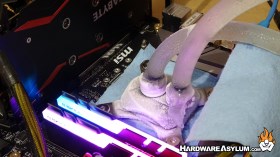 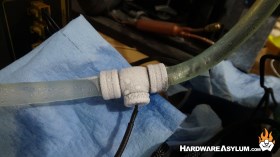 Overall this was a really fun project and with luck I’ll be able to revisit it again with some better heat exchangers and higher overclocks.