When going through the hardware vault I got kicked in the feels to do more with retro hardware and while my stuff is in really good shape I cannot say the same for the “other” hardware out there.  I picked up this motherboard on eBay and decided to make a project out of it.

The first order of business was to clean up the board and see if I can get it to post.  After years of sitting around many of the contacts were corroded but some CRC Electronic Cleaner and a little scrubbing from an old toothbrush fixed that up rather quickly.

A further visual inspection showed that the old 3.6v rechargeable CMOS battery had started to leak.  This is a VERY common issue with retro machines and something that plagued these boards even when they were new.  The fix back then was to remove the failed battery and use a remote AA battery pack.

But, I have a better idea.

This video was recorded over several weeks.  The first part shows me removing the battery and attempting to get the new CR232 battery holder installed.  As it turns out the new battery holder wouldn’t fit flush against the motherboard but with some extension wires and 3M tape I was able to space it above everything that was in the way. 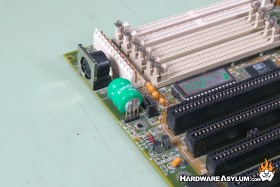 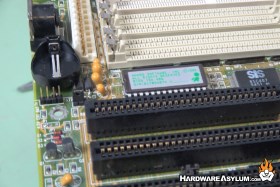 Unfortunately, I had forgotten that the old barrel style batteries were rechargeable and that the charge circuit needed to be disabled.  This can be done in a variety of ways but, the simplest is to install a small diode to the positive lead of the CMOS battery.

The second part of the video shows me “re”-fixing the CMOS CR232 battery holder adding a new diode and testing the results.