As a computer hardware enthusiast, I often strive to create some of the most capable system configurations money can buy.  Many of the components I review on Hardwareasylum.com are designed for users like me who want the ability to tweak and tune their builds along with options to expand their systems to meet a variety of different needs.

While the hardware may have changed significantly over the years the results reflect how we use computers in our daily lives and yet, at the lowest level, what we do with computers has not changed all that much.

One of the most popular things people did with their computers was to play games.  And much like games of today the developers needed to contend with hardware limitations to develop those games and what coined the term “Minimum System Requirements”.  While many of us have started to ignore these however, it was a real problem on early systems as there was a very good chance that you might not be able to play the game if your specs did not match.

For this Real Retro Gaming adventure, I’m going to play a game from my youth called “Hack”, or PC Hack as its official name.  This was a freeware offering that you could download from Bulletin Board Systems or buy out of the back of computer magazines.  The game itself is a MSDOS port of a UNIX game called Rouge and eventually became the basis for the Nethack.  Which is a game you can still download today.

This game happens to be the latest build of the game, Version 3.6, and was compiled in 1986.  Keep in mind that in 1986 the fastest MSDOS based computer you could buy at that time was the intel 286 and the vast majority of systems being sold were based on the Intel 8088 and 8086.  Namely the IBM XT and AT PC Jr, Tandy 1000’s and various clones. 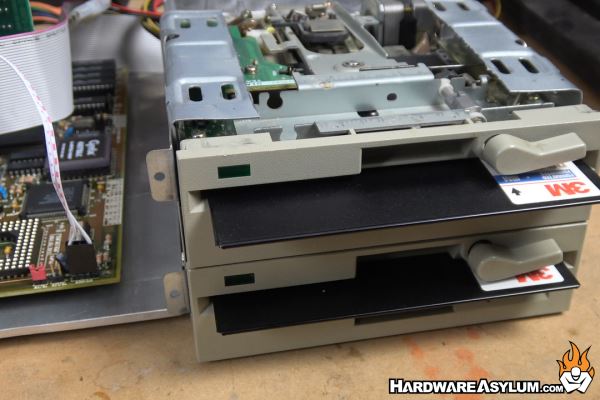 IBM machines favored the 5.25” floppy disk and, at the time, the most popular version had a storage capacity of 360k.  These were the Double-Sided Double Density disks of the day and amounted to how programs moved from one computer to another and if the family computer lacked a hard drive, it was how you loaded operating systems and ran programs.

This little bit of history becomes important as it describes what game developers needed to consider when developing games.  The main executable for Hack is 253KB in size and with the supporting files it fit nicely on a single 360k disk.  This was important as an error here would make it impossible to use or share.

One of the defining principles of Dungeons and Dragons (a huge influence in the development of Rouge, Hack and Nethack) is that everything is determined by chance and the roll of the dice.  This principle is translated to computer games through RNG or the Random Number Generator.  When playing PC Hack everything is determined by RNG and every time you play this game you get a different experience.  To support this a number of files are generated when you launch and save the game including level files and bones files and due to limited system memory, these all needed to be saved to the disk.

If you were lucky enough and got far enough into the game it was common for you to run out of disk space and would cause the dungeon to collapse, and… you’ll get to start over. 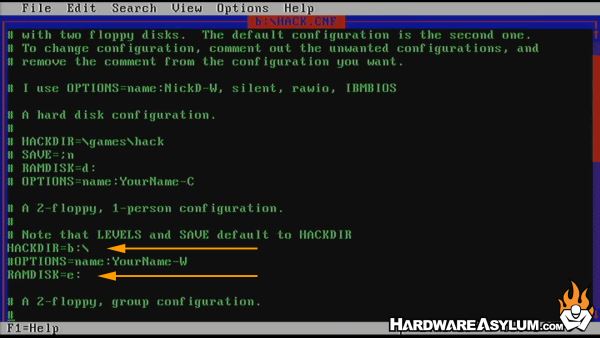 To give you the best chance of completing the game the developer built in multiple disk support allowing you to spawn the game from one disk, save your game to another disk and even load the randomly generated levels into a RAMDisk.  By saving the generated levels to a ram disk you not only speed up the game but, was the preferred method even if you were lucky enough to have a hard drive.

I have spent an unknowingly high number of hours in this game experimenting with different aspects all to learn what you can and cannot due.  There was no written guide for PC Hack, the internet didn’t exist and unless you had friends playing it was purely trial and error making it important to keep a copy of your latest save so you could restore it later when you die or do something stupid.

Which happened quite often.

The game contains 30 levels.  The upper levels are drawn in ASCII and consist of rooms connected by corridors.  Each room can contain a random bit of loot, there might have a gator symbol indicating a stairway, you might find a treasure zoo, a bee hive or, if you are lucky, you could find a store.  The fact that everything is randomly generated is what gives PC Hack years of replay ability and is kept me interested as a kid.

The last 3 levels of the game are maze levels and require a different strategy if you want to continue.  If you happen to reach level 30 you will encounter the wizard and his dog who are protecting the Amulet of Yendor.  This is your main objective and complete this game you must retrieve the amulet and escape the dungeon, alive. 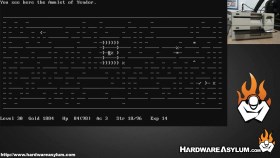 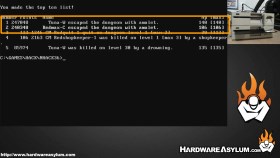 As of this video I have only beaten this particular game twice in my entire life.  The first was in my youth on the family Tandy 1000SX after what seemed like an eternity of disk swapping and several bike rides to the local Circle K while waiting for the game to load.

And the second will be in this video so sit back and enjoy the ride.