As we know it takes awhile to come up with new product designs and many times those new ideas keep circling back to something you have already created.  Silverstone, a company known for some of the highest quality cases you can buy, has been looking at their past products and finding ways to improve the classic shapes.

One of the first Silverstone cases we ever reviewed was the Temjin TJ04 and felt it was one of the cleanest looking cases you could buy.  In that review we also discovered that while it did look amazing the case was plagued with a few cooling issues that were easily solved with a few modifications.  In this review we will be looking at the TJ04-E Evolution chassis.  The case is based on the original TJ04 design but with a few significant upgrades.

The outward appearance of the TJ04-E is almost identical to the previous edition but with a few minor differences.  You will notice the front bezel is still a solid piece of aluminum with four external 5.25" drives bays occupying the normal location at the top of the chassis. 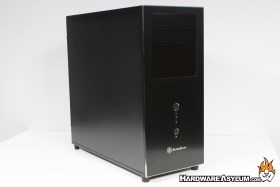 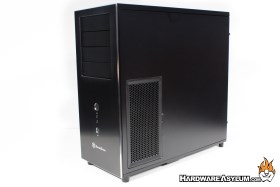 Looking at the reverse side of the case you will notice something new, an air intake.  One of the modifications we suggested was adding a couple intake fans on the motherboard side of the chassis to bypass the restrictive front panel vents.  It would seem Silverstone listened to this suggestion and took it a bit further.

A new standard in chassis design is to move the PSU to the bottom of the case.  This allows you access for better cable routing and opens up the case for better cooling.  You will find two cooling intakes at the bottom of the TJ04-E.  The large square is for your power supply to take air in from the bottom and route it out the back of the PSU. 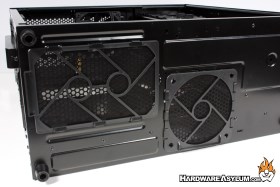 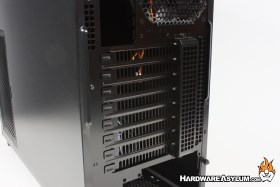 The second opening is for a single 120mm case fan and will route intake air up from the bottom of the case and force it around the front and back of the motherboard tray.  We have seen in the past where providing adequate cooling behind the motherboard can significantly lower overall system temperatures.

There are a total of eight expansion slots on the TJ04-E and is designed to support SSI-CEB motherboards (like the Asus ROG).  These larger boards are often designed for massive multi-gpu configurations and the eighth expansion slot will allow you to maximize their potential.
Cases