Coolers come in all shapes and sizes and while computer enthusiasts have largely gravitated to AIO and DIY watercooling there still is a thriving aircooler market out there.  The biggest reasons for going with one over the other is thermal capacity and, as with many things there are several drawbacks including the overall size of the cooler.

The general rule of thumb is that big coolers can transfer and dissipate more heat than smaller coolers.  This not only increases thermal performance but, can actually make your system run faster.

In this review we will be looking at a very different cooler from what you would normally find on Hardware Asylum, the Cooler Master I70C for LGA1700.  This is an RGB enabled CPU cooler with large aluminum fins and copper insert for efficient cooling.

You will find these inserts on all solid metal coolers as it offers a quick way to remove heat while also offering more surface area for the aluminum fins and a way for efficient heat dissipation. 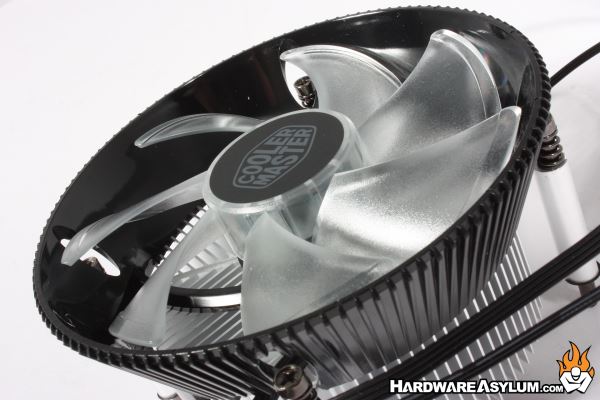 As you can imagine there isn’t much to this cooler.  You will get the metal heatsink with integrated mounting screws.  Attached to the aluminum fin array you’ll find the ARGB enabled 120mm fan that is ducted down to meet the outer diameter of the heatsink. 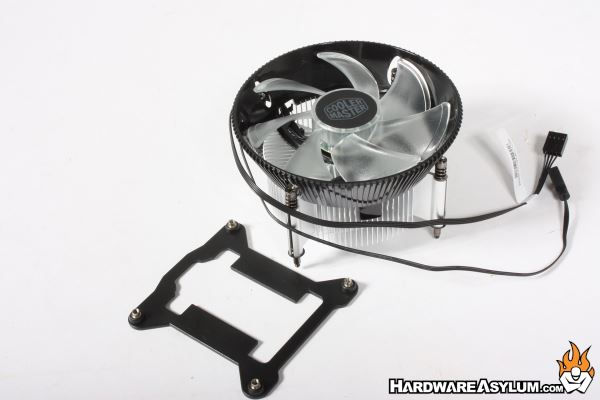 Given at the mounting screws are integrated into the heatsink there is no adjustment needed for installation.  The included backplate is designed to support LGA1700 systems only and won't work on any other system. 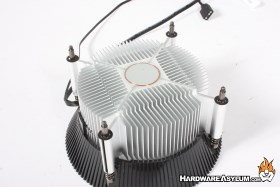 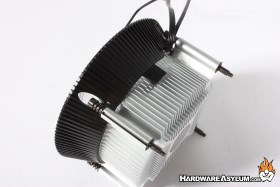 The Cooler Master I70 Line of CPU coolers all share a common design that centers on the copper insert which also occupies the “dead air” area below the fan motor.  This, in turn, offers maximum exposure to incoming air for the best chance at efficient cooling.

The Cooler Master I70C is extremely easy to install and only requires a Philips screwdriver.  You will want one that is all one piece as versions that use the bit inserts will not fit past the fan blades.

First line up the included backplate.  The threaded inserts will slot into the holes on the motherboard and self-align. 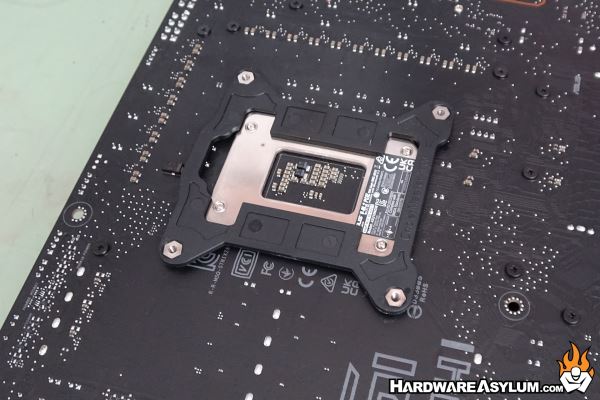 First line up the included backplate.  The threaded inserts will slot into the holes on the motherboard and self-align.

Next, flip the motherboard over such that the backplate remains in place.  I generally apply my own thermal compound for cooler reviews and opted for a single “pea” sized blob for this test.  This is because the copper insert will only occupy the center most section of the CPU and any excess thermal compound would become a messy waste. 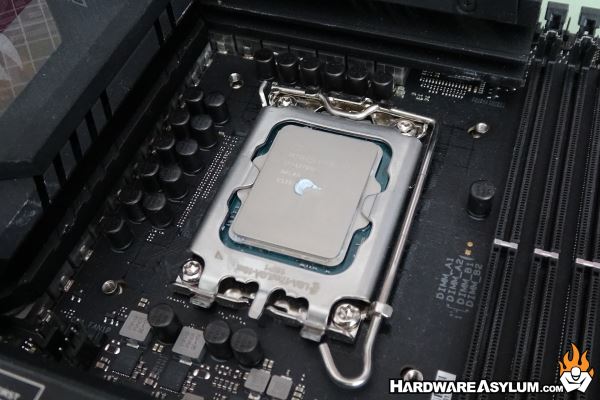 Finally, install the cooler by lining up the screws with the threaded inserts on the backplate.  Then tighten each screw following an “X” pattern.  Each screw will get a half a turn before moving to the next screw. Continue this until the mounting screws bottom out. 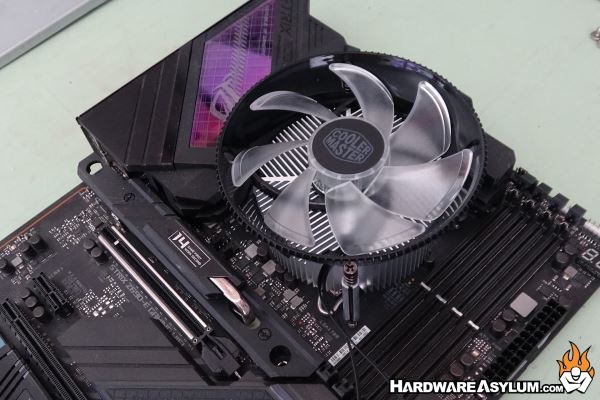 Connect the fan tail and RGB cable and you are ready to go.

The Cooler Master I70C LGA1700 Edition is designed for Intel Socket LGA1700 processors only.  Here is an overview of the system and testing methodology. 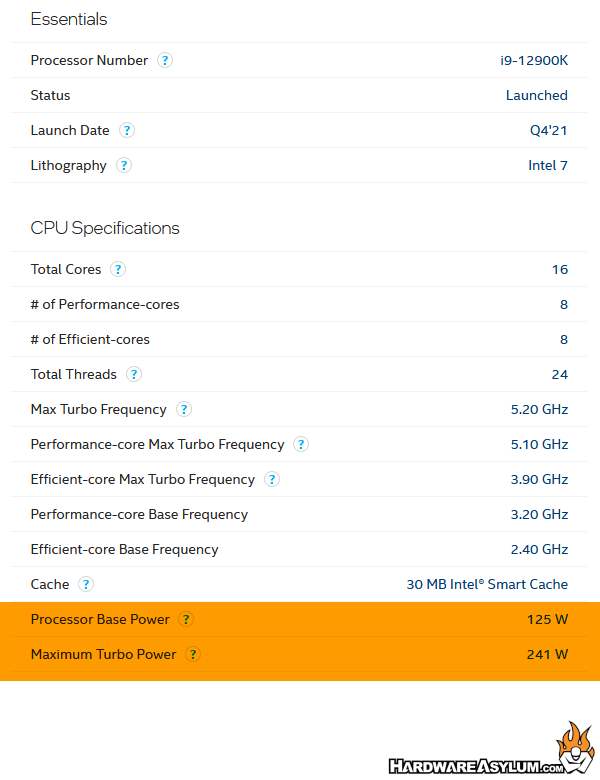 For those of you who follow the cooler reviews I do on Hardware Asylum you will normally see some pretty charts showing the maximum CPU temperature based on a simulated Prime95 heat load.  I find this method to be extremely efficient and tends to work well.

That is, until it doesn’t.

During my testing the Core i7 12900k processor temperatures spiked to 89c.  This is the temperature range where the CPU will then start to throttle and reduce the overall CPU frequency until the temperature no longer rises.

Unfortunately, the thermal throttle messed up how I normally test coolers so I will instead report on the results I have, minus the charts.

Calculating the TDP wattage of a CPU cooler only takes a little bit of math.  However, with the complexity of the Intel Turbo system does mess with the starting point of the calculations.  According to Intel the processor documentation the TDP for the Core i7 12700k is 125w.  This is due to the higher clockspeed of the K edition CPUs..

Once you apply a load you will notice that the processor starts to react and will match frequency speed against the internal thermal sensor and adjust things until it finds the maximum performance that will stay below a certain temperature.

What I found is that, while I cannot test this cooler using my normal methods, I did find that just about any “other” Alder Lake LGA1700 processor should work just fine provided it is not a K edition and under the 125w TDP of my Core i7 12700k.

When I set out to review the Cooler Master I70C LGA1700 Edition ARGB Air Cooler I wanted to explore the performance potential of a solid CPU heatsink.  What I ended up discovering is that this cooler has an undocumented thermal limit making it unsuited for certain Intel processors.

Despite this the cooler does preform quite well and while overall thermal performance was a bit of a disappointment the ARGB lighting was quite good and interfaced well with the ASUS Aura motherboard lighting.  Installation was also extremely easy due to the integrated mounting screws and single system backplate.

The Cooler Master I70C is a perfect cooler for system builds where space is a premium including SFF (Small Form Factor) builds.  The lower cost also makes it a great cooler for builders on a budget.  It also meshes well with the technical and thermal requirements of processors used in budget and OEM system builds.

As mentioned, the ideal processor choice is one with a TDP below 100w.  This would exclude any K edition processors and really anything with more than 6-8 cores.  You will want something in the 60w TDP range to get the best performance.

Of course, there is nothing stopping you from running this cooler on a Core i7 12700k, the system will thermally throttle, the fan will get loud and you will lose performance.  But, it will run.