These days when it comes to keyboards there isn't much in the way of new innovation.  You can opt for a mechanical keyboard, throw in some extra macro keys and change up the color scheme but there's not much else you can do, right?  Cooler Master is about to change your mind with their new Quick Fire Stealth Keyboard.

The Quick Fire Stealth is the latest in the CM Storm line of keyboards designed to reach a military grade level of quality in cooperation with professional gamers.  Like the rest of the popular Quick Fire lineup the Stealth is offered in a variety of the popular Cherry MX switches to cater to each individual taste.  But after that things start to get interesting! 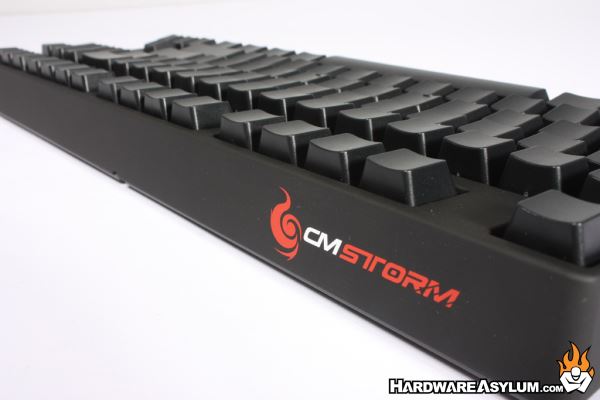 It's hard not to immediately notice the Stealth's striking all black look.  Gone are the familiar key markings we have all grown used to seeing on the top of each key.  The Stealth has relocated the markings to the front side of the key caps to provide the sleek black look that no doubt inspired the name.  This effect is further reinforced by the ability to replace the WASD keys with CM Storm red keys for a striking contrast.  The only lights you will find on this keyboard exist for the caps lock, scroll lock and the F5/Win lock keys.

Several advantages of this design immediately spring to mind.  For example, the key markings will not wear over time meaning that your durable mechanical keyboard should last as long as those Cherry Switches.  True smooth surfaces to the keys, except for the home row markers of course, makes for a comfortable typing experience even at 100 wpm or higher.  And of course there is that gentle nudge for those of us still cheating on our touch typing to get with the program!
Specifications
Part Number
- SGK-4000-GKCR2(Red switch)
- SGK-4000-GKCM2(Brown switch)
- SGK-4000-GKCG2(Green switch)
- SGK-4000-GKCL2(Blue switch)
Key Switch    CHERRY Blue / Red / Brown / Green
N Key Rollover    NKRO in PS/2 mode (12KRO over USB)
OTF Repeat Rate    4 levels (PS/2 mode only)
Interface    USB (PS/2 adapter included)
Extra Keys    6 pcs (WASD+Arrow keys) included
Keycap Puller    Included
USB Cable    Removable, braided, gold plated
Dimensions    355(L)x135(W)x35(H) mm / 4(L)x5.3(W)x1.4(H) inch
Weight    940 g / 2.1 lbs
Choosing your Quick Fire Stealth really boils down to identifying your particular flavor on the Cherry MX switches you like the most.  Blue tends to favor typists with a more tactile or "clicky" action.  Blue can also make it harder to double tap but provides the most feedback in terms of touch.  Reds require less force and tend to favor a softer touch which can also lead to accidental key presses but can be more responsive. Browns tend to be a little bit of both.  While they are less tactile, and less "clicky", they do have a feedback to them while still requiring less force than the reds. Green is a very rare switch type often referred to as a stiffer blue making its inclusion all the more notable.  Green is both a tactile and a clicky switch often reserved for the space bar. You can both feel the tactile bump and hear the "click" that occurs when the activation point is hit.

The Stealth is not a one trick pony.  The CM Storm team has included several other features often found only in high end, full size keyboards.  A full USB cable management system is paired with a removable braded and gold plated USB cable. A Win lock function is included with the standard multimedia key setup to prevent those annoying Windows slips.  There is even a Turbo mode setup allowing you to switch the key repeat rate on the fly (in PS2 mode) for those games where issuing repeated keystroke commands are critical.

I tested the Quick Fire Stealth for a couple of weeks of regular use coupled with several marathon gaming sessions.  Almost immediately I was forced to admit I depend more on a glance down at the keyboard than I ever thought possible.  I guess a career as a keyboard entry expert is not in the cards!  Once I settled into a session of gaming those mental hang-ups were forgotten and I adapted quickly to the rhythmic clicking of those blue switches.  I thought the small size of the keyboard might be an issue but the added space on my pull out tray allowing me to switch to a larger mouse pad.
Conclusion
The Cooler Master Quick Fire Stealth is really an interesting effort at thinking outside the box.  Most gamers don't have much use for the typical 10 key setup and the added space savings makes it easier to pack along for your LAN adventures.  Unlike most compact keyboards, the Stealth has a traditional layout for the right side making it easy to find your standard function keys like the insert and delete keys.

There is a lot to like about the pure black look that relocating the markings brings to the keyboard.  No more worn out keyboards and a true mechanical durability even at a very sub $100 price point.  The more time I spend on these Cooler Master mini keyboards the more I like them.  Really, when was the last time you used those ten key setups?

I would have loved to see the Stealth pared with the same backlighting found in Cooler Master's other mini, the Quick Fire TK, but that may be at odds with the theme.  Ultimately I preferred the more standard layout and the added features that make the Stealth perform as well as gaming keyboards costing much more.  And you won't get tired of the double takes your Stealth will get you.
Available Images