High performance memory can be found in a variety of different formats and depending on the platform one type can be faster than the other.  During the time when we had low speed memory controllers there was a premium placed on low latency modules.  As memory controllers improved the focus shifted from latency to overall memory speed since that increased performance.  Latency is still important to overall system speed but has less of an impact as memory speeds increase.

In this review we will be looking at a very special DDR3 memory kit from GSKill called the RipjawsX F3-17000CL9D.  We consider GSKIll to be one of the top memory suppliers to the enthusiast market given their preference to offering a variety of high speed and low latency memory kits. 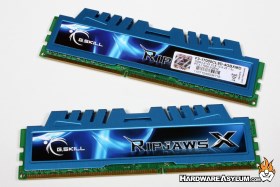 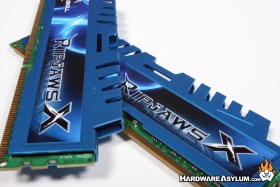 RipjawsX is a second generation memory module for the Intel platform.  The first modules were primarily designed for the X58 and later adapted for the P55.  The design is a play on the name "Rip Jaw" where the heatspreader takes on the appearance of teeth.
Sandy Specific Memory
The Sandy Bridge architecture puts a huge emphasis on memory performance so much in fact that the memory multiplier is actually an integral part of the system and requires some special attention.  There are 5 memory multipliers available with Sandy Bridge, 10.67, 13.33, 16, 18.67 and 21.33.  These numbers multiplied by the Base clock (BCLK) determine the memory frequency.  By default our 2600K boots at 13.33 x 100 giving us a memory frequency of 1333Mhz.  If you are fortunate enough to buy higher speed memory you have two options to increase performance.
The second option is often limited by your motherboard and memory modules.

Our GSKill RipjawsX are 2133Mhz parts and come with a fully supported XMP profile, that profile, when set, will adjust the system clock to a 21.33x along with setting the base timings and voltage.  A surprising feature of these modules is their speed to voltage ratio. Most high speed modules require 1.65v to run past 1600Mhz.  These RipjawsX modules are quite different and only require 1.5v to run under their XMP settings. 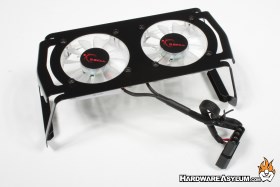 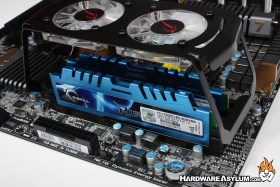 RipjawsX modules feature a very ornate heatspreader design with simulated fins across the top of the module.  The heatspreaders are made from stamped and anodized aluminum making the entire package extremely light.

Frequency and voltage play a huge part in overall heat production and to keep these modules cool GSKill has included their Turbulence II Fan system.  The cooler is comprised of two 50mm fans that attach to the memory slots.  This provides you with an extra 8CFM of direct airflow across the memory modules and surrounding area.  While we never noticed the modules running warm the extra airflow can be a welcome addition to any system.
Memory