In case you are not aware there is a craze sweeping the PC community called “RGB”.  It is an interesting concept that blends RGB LEDs with just about everything.  Motherboards are now shipping with onboard RGB controllers.  Video cards have RGB LEDs, cases, fans, mousepads and even Sound Cards are coming equipped with ways to show RGB LED effects and some are even synchronized.

Back in the day, and LED fan was nothing more than a standard fan with four LED lights, one for each corner.  Many vendors expanded on this by adding RPM sensitive displays so you could program messages to show when the fans were up to speed and others simply added more lights and even ways to turn them on and off.  It was the wild west and anything goes.

An apex in RGB LED technology has come where fans are fully RGB compatible allowing an array of lights to occur and if paired with an appropriate RGB controller can deliver some pretty spectacular lighting effects that run on a programed pattern or even react to sound and temperature changes.

Sounds pretty good right?  Well, what if your favorite fan profile isn’t available in RGB? Or, better yet your system doesn’t support RGB and you want to get on the band wagon? Or, better still, you own a Phanteks case with an RGB controller and not a single RGB fan to your name??

Phjear not!  Phanteks has a solution and it is called Halos. 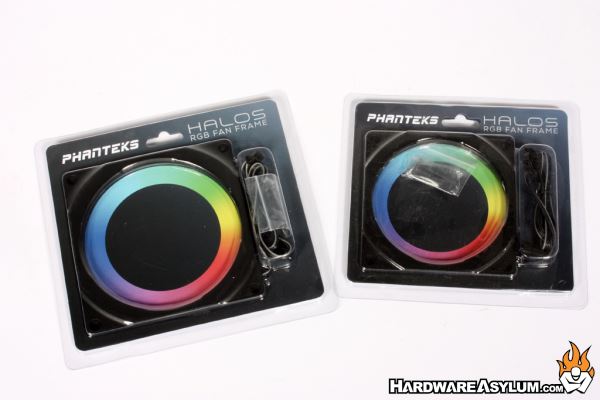 Phanteks Halos is a very interesting product and might also be one of the most effective products used to add RGB lighting effects on ANY 120mm or 140mm fan.  Hands down, bar none, best ever, #micdrop.

If you haven't guessed Halos is a RGB Fan Frame that through the power of RGB LED lighting can create a ring of light to illuminate the fan center to any color you want.

The top of Halos is a solid black plastic designed to prevent any LED light from escaping and helps to give your fans a stealth look when viewed during the day.  Of course if your fans are white, brown or any color aside from black there could be a problem but, that is a small price to pay for awesome LED lights. 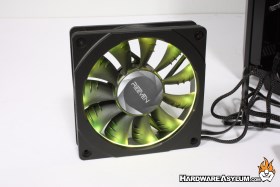 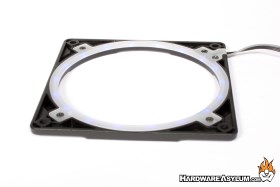 Under Halos you’ll find 18 RGB LED lights on the 120mm version and a total of 21 RGB LEDs on the 140mm.  These are positioned in a circle and directed at the center of the fan to ensure illumination is where it is needed most. 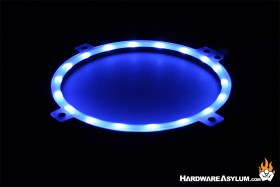 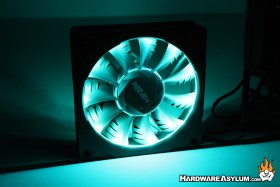 A 4-pin RGB lighting connector runs the lights and is compatible with all of the Phanteks case controllers.  In that ecosystem the lights are plug-and-play making their installation extremely easy.  The Phanteks RGB controller is a pass through system allowing you to control the case and Halos lights using any one of the three major RGB LED systems including Asus Auroa, MSI Mystic Light and Gigabyte RGB Fusion.

As I have mentioned before the Halos is a pretty simple concept.  Make a circular RGB LED strip, attach it to a fan frame and you have a way to illuminate any 120mm or 140mm can fan.  This is basically the recipe for any RGB LED fan including some high tech designs like the Thermaltake Riing and whatever Corsair is forcing YouTube channels to use these days.  The difference comes with how you control the RGB LEDs.  Thermaltake includes a controller that requires software to run both the lights and the fans.  Many of the other RGB fans on the market follow a similar pattern which is also the biggest flaw.

That being you have to run the RGB software to control the fans.

With the Phanteks Halos you have a clear separation between the fan control and the RGB lights.  This gives you predictable cooling performance using your existing cooling fan which can now be illuminated and controlled independently by a Phanteks controller or by a standalone RGB device with a few modifications.

Of course there are a few downsides the largest being installation.  With the Halos you are sliding something between the case and fan which increases the airgap and can prove problematic if your mounting screws are not long enough.  Likewise installation of the fan between the case and front bezel may encounter space limitations so be sure to check that during the mockup process. 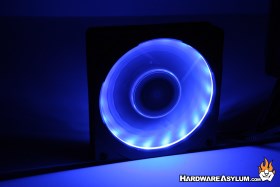 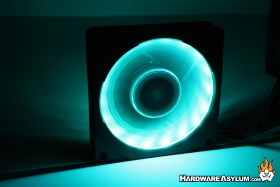 In terms of light I was really impressed with the Halos and how it was able to concentrate light on the fan blades and not leak any of it past the frame in the opposite direction.  This effect may not be for everyone, for instance with the TT Riing fans you not only get illumination over the fan blades but get a well defined ring around the fan frame.  Thus highlighting the existence of the fan regardless of where it is installed.  With Halos you get a completely different effect showing a solid circle of light concentrated towards the center instead of outward.

As with everything custom in the enthusiast PC world it comes down to having options and deciding which of them is best for you.  The Phanteks Halos are a perfect complement to this and while they are designed for standard non lighted fans there isn’t anything stopping anyone from adding even more lights to existing RGB fans and really pushing the boundries.