Back in the early days the only way to hook up a HDD or optical drive was by using an ATA ribbon cable.  These monsters came in 40 and 80 pin varieties and did everything in their power to clutter the inside of your case and hinder airflow.  Rounding these cables was extremely common but they still took up a bunch of room and it wasn’t until SATA connections became mainstream that enthusiasts got some reprieve.  Your standard SATA cable is a flat ribbon that measures 0.25 inches wide and comes in a variety of lengths.  The cables fold up nicely and work quite well if you don’t fiddle with them too much.

The Silverstone CP11 is an ultra thin SATA cable that addresses the issue of when SATA cables take up too much room.  A good example of this is when vertically mounted SATA ports prevent you from installing a secondary video card or when your custom mod is showing too much cable. 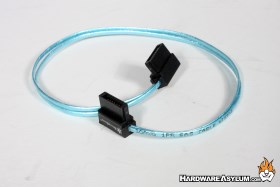 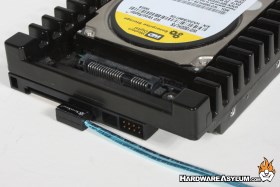 The CP11 cable measures in at 11.5 inches long (300mm) and is comprised of two thin data cables encased in a translucent blue plastic shield.  Each end features a lateral 90 degree connector that allows the small cables to exit off the small side of the connector instead of out the top.  This makes the cable connection extremely compact and allows it to be routed just about anywhere.

There are a variety of benefits to having a CP11 in your system and while the only potential downside is cable length we wanted to do some super scientific testing and see if a generic SATA cable was as fast as the Silverstone CP11.

Before we start let’s look at a SATA cable up close.  The SATA cable below is a generic version that you get with any motherboard.  When the shielding is removed you’ll find two foil wrapped bundles comprised of two insulated wires each.  Two thin ground wires complete the package and allow the cable to work.  As with most electrical wires the plastic is nothing more than an insulator and provides some separation between the wire pairs. 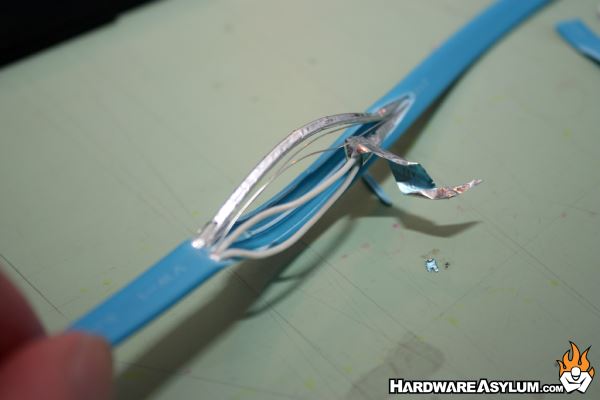 The CP11 exemplifies this and does so by removing the bulky insulator. 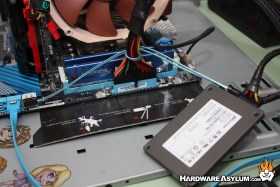 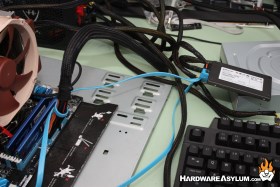 For our testing we decided to test transfer speed and interference using the Physical Disks benchmark found in Sisoft Sandra.   The tests would be run first with a straight cable direct to the SSD and then again with the cable wrapped around the 24pin power connector.  If all goes well we should see no change in performance. 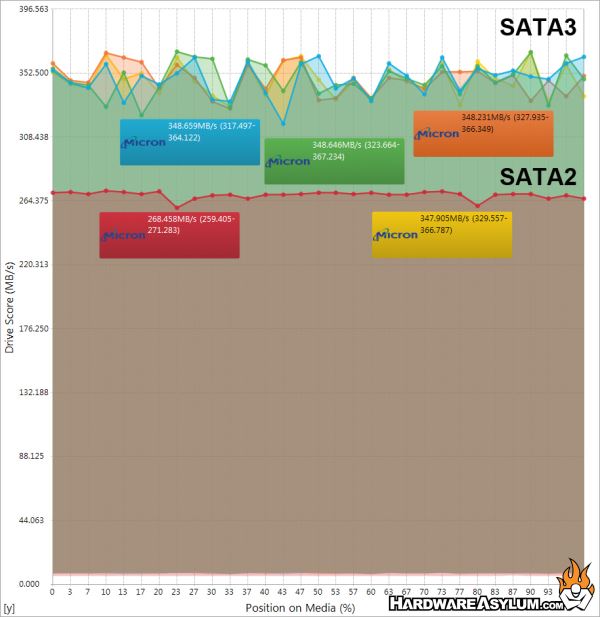 As you can see from our chart there was virtually no change in read performance and while transfer speeds tend to fluctuate at the SATA3 level the average was well within tolerance.

You may not think that SATA cables could really be a problem in a modern computer and for the most part you would be correct.  However, there are a few instances where having even less cable bulk can be a benefit.  A for mentioned example is when your SATA cables interfere with expansion cards but you also should consider ultra small computers like Steam Machines, HTPC and Media Centers. These systems will likely occupy a small chassis and to ensure the best airflow you will want to reduce excess cables as much as you can.