Back in the early days, computers were nothing more than electronics shoved into a beige box.  No fancy lights, rarely any cooling fans and for some reason they were allergic to water.  (go figure).  In an attempt to make their machines better enthusiasts and casemodders would change things.  Extra cooling blazed a trail to side window installs and once you could see your hardware it needed lights.  Lighting started with neon tubes followed by Cold Cathode tubes and eventually EL strips.  LEDs didn’t make a huge impact until the first LED lighted fans hit the market.  While many believe that LED fans are what started the LED movement they were merely forgetting the dark ages when lighting was no longer a thing.

For awhile nobody wanted lights, users wanted clean hardware, no more onboard status lights, debug leds and even the activity lights on computer chassis had to go.

That was until MSI released the first X99 Godlike motherboard with onboard LED lighting effects.  Keep in mind that the MSI X99 Godlike wasn’t the first time LEDs were put on a motherboard.  Abit had “underglow” Foxconn had some boards with edge lighting and DFI offered UV reactive expansion slots but none of these implementations offered controllable patterns or really a way to change the color.

Regular readers of Hardware Asylum will have heard this story before and for me it is fun to stroll down memory lane because, to understand the future we must know where we have been and realize that even the smallest of trends can create some pretty amazing products. 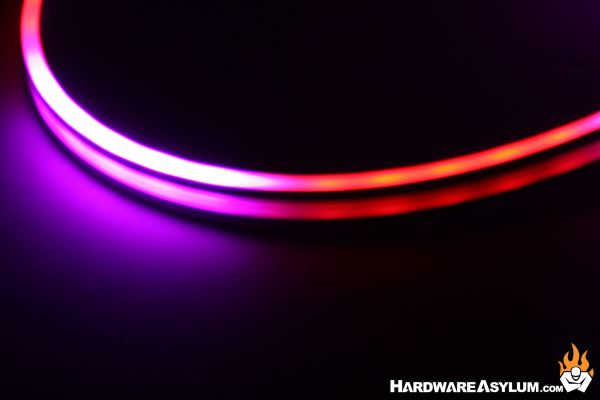 In this review we will be looking at a new and exciting LED strip from SilverStone.  As many of you know LED strips have a familiar look.  They are built from a flexible PCB that lace up LED lights and allow a controller to activate them.  Your LED television works the same way but with much smaller lights and a much larger grid.

Typical LED strips are flat.  Lights will be applied to one side of the strip while the reverse is typically features a way to secure the strip to a surface.  Magnets work well in a computer case and allow the user to reposition the strip whenever they want.  Adhesive offers a more permanent solution and is a popular option for those looking to light up a desk, chair or the back of their monitor.  Most strips feature 18 lights and will have some sort of covering to protect the strip from damage.

SilverStone has offered a variety of different LED light strips from standard single color strips with a frosted lens to addressable strips with a clear lens.  The differences are rather significant in that frosted strips attempt to blend the light and give the appearance of a single light source while clear strips offer brighter colors.  In the case of ARGB the intent is to see every individual light due to the patterns they can reproduce.

Enter the SST-LS04 Premium dual-sided 2020 ARGB light strips.  These are a completely new take on what an LED strip can be and they are quite nice.