In the excitement associated with having the best processor or motherboard we sometimes forget that our systems have gotten a little overpowered for the average every day user.  That's not to say we can't use 6 processor cores or can benefit from an insanely fast memory controller but rather that we don't always need all of that power to check email or watch a high quality movie.  Yes, it is nice to have but all of that power can get expensive, it can be noisy, and most of all it takes up valuable space.

In this review we are looking at a completely new product from AMD infused with a super small motherboard from Gigabyte called the E350N-USB3.   As the name suggests this board is based on the new E350 Fusion system from AMD.  Fusion is comprised of 2 chips which create a system on chip configuration.  The first is an E-350 APU or "Accelerated Processing Unit" which combines an ultra low power processor with a 6000 series video card.  As you can imagine this chip is the powerhouse behind the whole system.  The second chip is the Hudson-M1 FCH I/O control chip, or "chipset" in the traditional sense, and is in charge of connectivity to the APU and the rest of the world.

Both of these chips combined consume less than 18watts which can easily rival some of the most conservative mobile computers in terms of overall power consumption. 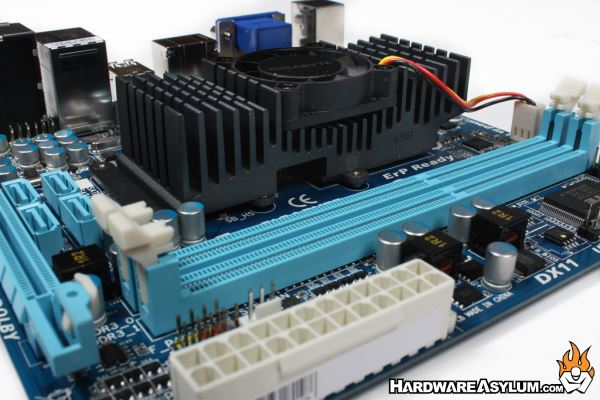 So here comes the most difficult thing about running a review site, product segmentation.  In the past we have not honored the segmentation of products under the guise that you get what you pay for.  However with a motherboard like this we are presented with a challenge.  Do we spend time testing products that match this system in performance? Or do we take the approach that as a desktop system it should be tested against other desktops despite having some rather large disadvantages.

Well, it was decided to do a little bit of both.  First we will recognize that the E-350 system is not a gaming or overclocking powerhouse and while you can game on this platform the end result may not be what you had expected.  We will also recognize that while we could test this system against Atom enabled netbooks or even older Core2 Duo systems the effort involved would not be a good use of our time, nor be a benefit to this review.  Instead we'll run this motherboard thru our normal testing suite with lower end reference systems to measure performance and then wrap things up by speculating the multitude of ways a system like this can be used.
Motherboards