As always Silverstone had some really good cases on display including four new ones from their “inexpensive” line.  These are available in two configurations which seems to encompass the entire case spectrum, Silent or not.  The first case is the standard configuration with a classy flush side window and lots of cooling.  Next to that is the silent edition that comes equipped with sound absorbent foam on all panels, no window and revised cooling.  Indecently Corsair has a similar case lineup that includes the two case styles and even the super popped side panels.

As it would turn out Corsair used the same factory to build their cases and why reinvent the wheel when they can creativly sample an existing design for their own use. 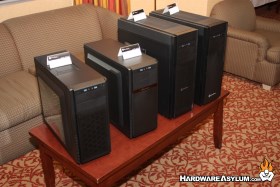 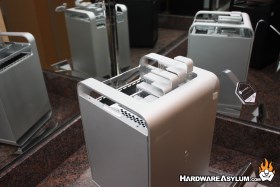 Other cases for 2015 include the CS01 “NAS” server case with aluminum hard drive trays and features a spot for a MiniITX motherboard.  The handles across the top allow you to easily transport making it perfect for a mobile video studio where you need lots of fast drives on the go.

One of the highlights of the visit was checking out the new Raven RVZ02 Prototype.  This case is designed to be smaller than the Raven RVZ01 with better cooling and more efficient layout.   The front of the case features a sliding door that covers the front USB ports and audio jacks.  It also holds the raven activity light that changes color based on system state. 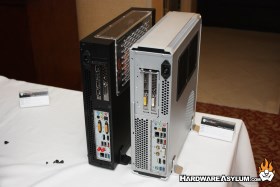 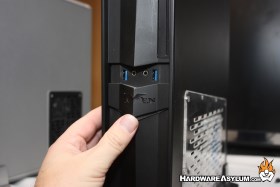 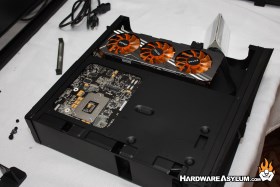 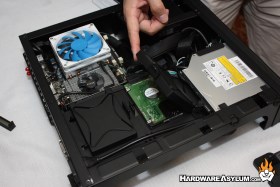 Inside the Raven RVZ02 you will find that the case is divided into two chambers, front and back.  On the motherboard side you can access the hard drives, optical and power.  Flipping the case over and you’ll have access to the video card and the back of the motherboard.

One nice thing about the new design is that each side contains its airflow and the windowed side panels are interchangeable and offer ample airflow into the case.