They say you cannot build in a vacuum, while this may not apply to space travel it does mean that to make something great without influences from the outside and feedback from your target audience.  Gearbox does this during the course of game development and will actually pull people in off the street to play their games in exchange for feedback and suggestions.

The MSI Overclocking Workshop was not designed to be a record setting event but rather an opportunity to allow experienced overclockers the chance to use the latest XPower Z87 motherboard and provide feedback on what they liked, and disliked about the new platform. 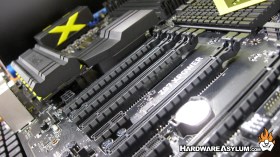 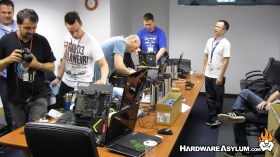 All of the systems were setup identically and included a XPower Z87 motherboard, GSKill memory and as many GTX 770 Lightning graphics cards as they could find.  There was a tray of retail and ES Haswell processors to choose from but, as the attendees discovered they were all beat up pretty bad and degraded to about 5.5Ghz each.  This limitation wouldn't allow for any world record runs but did give the overclockers the chance to use the MSI tuning tools to tweak for the best performance.  For the most part the systems ran solid all day and even with bad CPUs would post some rather impressive numbers

Most of the overclockers concentrated on 2D benchmarks while a few others decided to go after 3D fame using the latest GTX 770 Lightning.  For those who don't know the GTX 770 Lightning is a spec bump over the GTX 680 Lightning and features identical PCBs, VRMs and Twin Frozer cooling system.  In fact aside from GPU and Memory the cards are identical except for one major difference, SLI support. 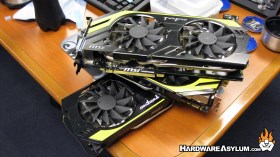 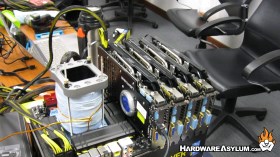 The GTX 680 would easily run in 4-way SLI mode (four cards) but NVidia decided to limit the GTX 770 to 3-way operation in hopes that real enthusiasts would buy Titan for proper 4-way performance.  You can physically run 4 cards but only three will link using the current drivers.  This is a major oversight in my opinion and many of the overclockers at the MSI event agreed. 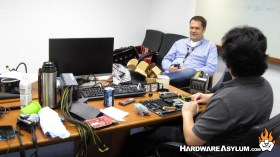 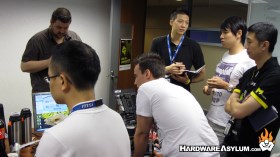 At the end of the event MSI gathered everyone up and asked specific questions about what the overclockers liked about the new system and what could be improved.  This sort of feedback is crucial for the success of the XPower and MPower motherboard lines and proves that MSI listens to their users.
Available Images