Originally recorded October 2012
Update Required To play the media you will need to either update your browser to a recent version or update your Flash plugin.

What Makes a Hardware Review Site
There are many different types of hardware review sites that cover a wide range of products.  Some are professional sites while others are of a hobbyist variety.  Those sites can cover enthusiast topics, gaming news and overclocking topics.  The key difference between them is the target audience and the kind of traffic they pull in.

In this segment Dennis and Darren continue their discussions on what makes a review site and talk about how you make money doing reviews and where the money comes from.  The segment takes a serious turn calling out a few sites that broke the moral code by breaking NDA and the impact that has on getting more pageviews.

Of course marketing and banners is the primary way for any site to make money on the internet and review sites are not immune from this.  There are a few exceptions where sites are not funded entirely by banner advertising but from other means.  For the most part Ninjalane falls into that category and is why you see very little advertisements on the review pages.

Darren does extreme overclocking - Kinda
In this episode Darren talks about his experiences overclocking the Gigabyte Sniper 3.  While the intention was to enter the Gigabyte Classic Challenge it ended up that his processor wasn't good enough to compete in SuperPi so the event quickly changed from contest position to exploring how to run 3Dmark01 SE and SuperPi 32M. 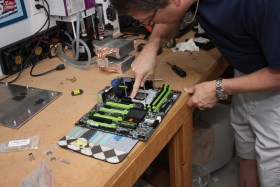 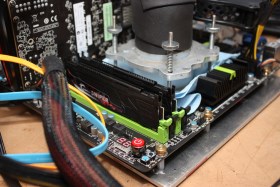 Overclocking started as a pared benchmarking session where Darren would use the Single Stage phase cooler to chill his 2600K while Dennis was on hand to help with the various settings and voltage.  In the end the processor tapped out at 5.2Ghz and the Radeon 7970 was giving us fits but in the end some scores were generated and they both left with a good sense of accomplishment.

MSI MOA Grand Finals and the Impact of GPU Voltage Adjustments
Not much to say here but congratulations to Team_USA lead by Splave and Romdominance.  They came in second place at the 2012 MOA Grand Finals due in part to an excellent SuperPi 32M time and coming in first in 3DMark03!

The second part to this segment talks about something Dennis noticed when watching the MOA livestream and it has to do with the hard mods done to the GTX 680 Lightning.  At first Dennis thought these were for Cold Bug control but later discovered that some contestants were adding voltage trimmers to the card and thus bypassing the built-in voltage control.

As the story unfolds Dennis and Darren talk about the nVidia decision to remove unlimited voltage control and how this decision will eventually impact the enthusiast community and casual overclockers.