For this review I have decided to test the EVGA Frostbite 2 against four common thermal compounds.

My first test was a texture and color test and for this one I picked the big three to start things off. 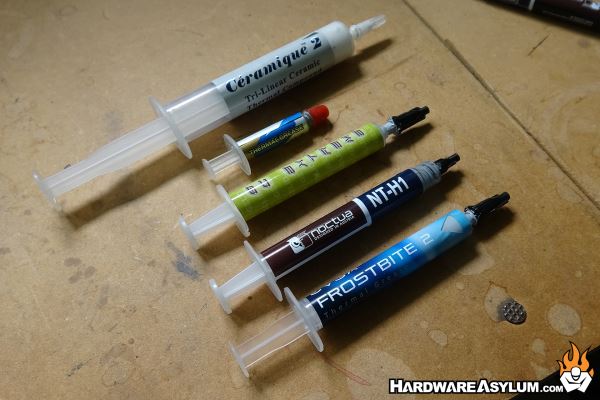 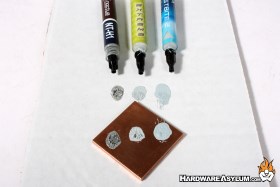 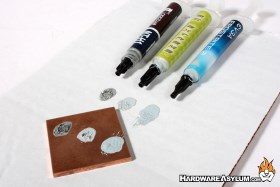 The photo indicates a “ball” of paste that was squished using the weight of the copper shim.  The shim was slid down slightly and then lifted away.

As you can see the Noctua NT-H1 is the thickest of the three followed by the GC Extreme.  The Frostbite 2 is the thinnest and easiest to spread.

Interestedly enough the Frostbite 2 is also the only one to leave thin lines of paste as its being applied.  Once placed the paste is very sticky and doesn’t slide around much.  The GC Extreme is very similar in texture and will leave strings of thermal compound.

Of the three the Noctua NT-H1 is the easiest to clean up and will simply wipe away.  Gelid is next as it has a tendency to become sticky after use.  Finally the Frostbite 2 is the hardest of the three to clean, after a few heat cycles it appears to set and requires a little more effort to remove.  Incidentally the clean up reminded me of Arctic Silver Ceramique in terms of stickiness though not quite as bad.

Per my usual approach to thermal testing I look at things from a real world perspective.  To facilitate this I use real computers, simulated and repeatable workloads and monitor the ambient temperature.  Final load temps are recorded and run back to back to look for any variances.

There are MANY different ways to install thermal compound.  I prefer the “5-Dot” Method and have been using that method since the introduction of the heat spreader.  I have tested many heatsinks this way and built $5000 machines with zero issues.  The paste has ALWAYS spread evenly with 100% coverage and has been thermally consistent across multiple mountings.  I cannot say the same for “Pea” or “Spread” methods. 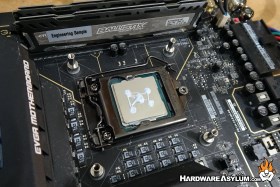 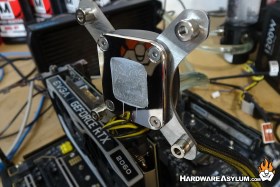 Case in point: EVGA Frostbite 2 before and after thermal testing.  The 5-dot method does use a little extra thermal compound but, I’ve done this enough to know how much to apply to get a similar result.

Testing Note:  I started testing the compounds using a Noctua U12A cooler and found all of the compounds were recording the same temps ~75c.  It was at that time I figured the cooler needed to be faster with more capacity so I switched to the SilverStone PF360 360mm AIO w/ 3x Noctua NF-F12 Fans.  This worked well and started to spread the temps but, I ran into an issue of a tie between two compounds and figured I needed to go bigger once again. 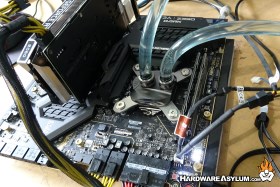 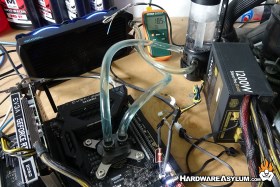 The onboard temperature probe was used to obtain and record system temperature data and being that this is a multi core processor we need something that will work across all of the cores at once.  For this task we're using Prime95 set to Small FFTs and enough instances to cover all the cores

Core speed was 4.4Ghz @ 1.1v.  The CPU was set to 4.7Ghz in the EVGA BIOS however Prime95 uses AVX instructions so everything down clocked three clicks.  Temperatures would stabilize after 3 loops of Prime95 when the temperature was recorded.  A second loop was done once the CPU temp reset back to idle.

During my tests the SilverStone PF360 AIO had both the Gelid GC Extreme and EVGA Frostbite 2 at the same temperature of 64c.  This is a great result but, a tie just didn’t seem right.  That is when I setup the Kryos in a showdown match to both reconfirm the previous temperatures and, to see if there would be a tie breaker.