It is a little known fact that companies tend to keep products around that are popular with consumers and while this isn't widespread in the computer industry there are a few products that can stand the test of time.  Computer cases are one example where when something works you keep selling it and make sure not to change a thing.  Another example would be CPU coolers.  There are basically two major components to a CPU cooler that make or break it in the marketplace, compatibility and capacity.

Compatibility is an easy one and simply means that if you can physically install the cooler on your system there is no reason why it can't be used.  Capacity is a little more difficult to define but is fundamental to a cooler in that if it cannot dissipate the heat you likely shouldn't use it. 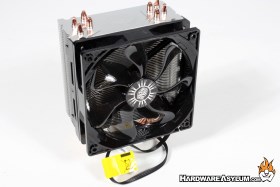 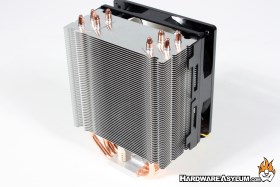 The Hyper 212 Evo is a tower style heatsink and designed as a silent OEM replacement for those who want better cooling but have little to no desire to do any major overclocking.  Indications of this can be seen in the design given there are only four full length heatpipes that flank both sides of this 120mm heatsink tower. 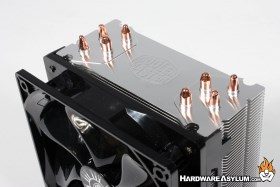 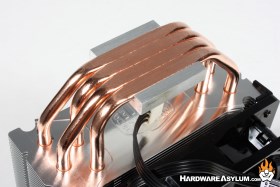 Those of you familiar with the Hyper 212 Plus will know that it was the first Cooler Master heatsink to use the new core contact method that put the heatpipes in direct contact with the CPU.  While we don't particularly like this style of heatsink it does serve a purpose by reacting quickly to changes in heat load.

As we can see from the accompanying photo the core contact design has been brought back and now occupies a much larger contact area with no gaps in coverage.  This approach is much more efficient since it can put more of the heatsink over the center of the processor.
Cooling