Tower heatsink design is not a perfect science and in some ways designers are still experimenting to find that perfect combo.  Over the years we have seen several different styles of tower coolers.  Some rely on dual fans to remain cool while others work well due to their massive surface area.  All of them perform well but very few work well based on what we consider to be good design practices.

In this review we will be looking at the Coolermaster Hyper 612.  The Hyper name is quite old with one of the original designs released back in 2008.  Coolermaster upgraded that cooler a year later as a core contact design which was faster but, not much better than the original.

The Hyper 612 is a traditional tower cooler with six heatpipes and single 120mm cooling fan.  The fan is the same one used on the V6GT and features an operational range up to 2000rpm with a maximum airflow of 82cfm @ 36dBA. 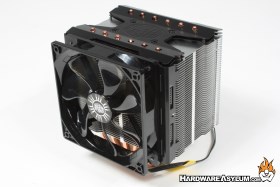 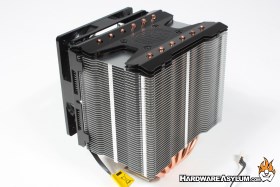 The unique fan blade design on the Hyper 612 was created to direct exhaust air into a column rather than the traditional cone found on most fans.  As you can imagine this does increase airflow across the heatsink which means you can accomplish more with less.  We noticed the benefits of this when we reviewed the Coolermaster V6 GT and are glad to see the fan being used here

In almost every heatsink review we have mentioned several things that help increase overall heatsink efficiency.  The first of these is heatpipe orientation and how if you put heatpipes in direct line of oncoming air they tend to cool better.  The next is total mass at the heatsource to hold the heat and help promote the heat transfer.  We have found that with more mass near the base of a heatsink you are able to increase total capacity and thus cool better. 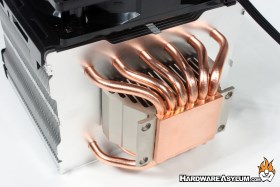 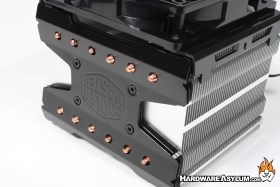 We are glad to say that both of these suggestions are present in the Hyper 612 design.  You will first notice that all twelve heatpipes are in a vertical array and in direct airflow from the cooling fan.  Combine this with a proper column of air and you have excellent cooling exposure.  The next thing you will notice is a huge aluminum heatsink between the radiator and heatsink base.  This extra mass should really help with overall performance and heat capacity.
Cooling