The tower style heatsink has become quite popular over the years due, in part, to how efficient they are at keeping your CPU cool.  This efficiency is determined by a variety of things including heatpipe size, number of heatpipes, total mass, and size of the fans.  You would assume that more is always better but that isn't always the case.

In this review we will be looking at the NZXT Havik 140 heatsink.  This is a tower style heatsink that features dual 140mm fans and six heatpipes in a non-traditional configuration.  We say non-traditional because they run perpendicular to the cooling fans for maximum exposure. 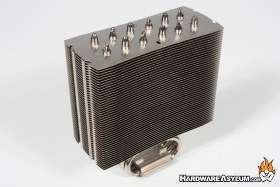 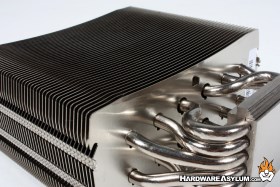 We have mentioned before the position of the heatpipe tends to directly relate to how well the heatsink can cool.  For instance putting the center most heatpipes in the flow of the fastest moving air tends to work better than hiding them behind something.  We have also seen how having the pipes in close proximity to each also helps as the air passing over them tends to get disrupted and does a better job with heat transfer.

The Havik 140 positions their twelve heatpipes at even intervals across the tower with the center most pipes positioned along the outer edges where the highest velocity air should be. 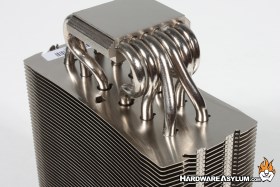 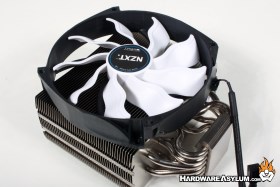 This heatsink comes with two very ornate 140mm cooling fans that appear to be designed to compensate for the cone of exhaust air common to rotational fans.  As you can see the inner blades feature a slight ridge that would indicate they are attempting to create two cones and minimize the dead area located at the center of the fan.
Cooling