It is not uncommon for companies to have two product lines that essentially do the same thing.  Of course there are always differences like the Ethernet controller on a motherboard or the cooler on an overclocked video card.  However, under all that you have something that relates to something else that company offers.  bequiet!, the German based cooling and power supply manufacturer, is no exception and offers two basic styles to their heatsinks, the Dark Rock and the Shadow Rock.

In this review we will be looking at bequiet! Shadow Rock Slim.  This is a medium performance cooling solution based on the Shadow Rock design principles.  The focus is to provide the same great cooling performance and just make it less expensive.   You get the same bequiet! design but you’ll have to settle for a few sacrifices when it comes to style and cooling capacity.

The Shadow Rock Slim is a tower style heatsink following many of the traditional tower design ideals including push pull fan configurations, smaller profile and good heat capacity.  This may come as a surprise but, the Shadow Rock Slim is actually quite small when compared to the other bequiet! coolers we have reviewed. 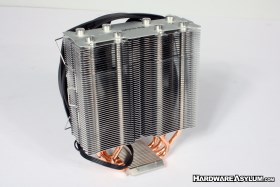 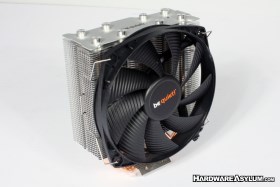 Overall construction is extremely good thanks in part to the thicker aluminum radiator fins and pipe fin connections,  In fact due to the material choices you will be hard pressed to find any locking tabs along the edges normally used to maintain proper fin spacing.

You will find a total of four 6mm heatpipes on the Shadow Rock Slim that extend the full length of the cooler.  Some may call this an eight heatpipe design given that the heat load is located at the center.  The heatsink base is CNC machined and then appears to be plated for durability. 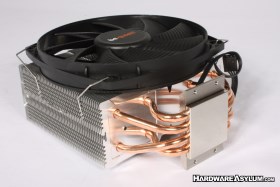 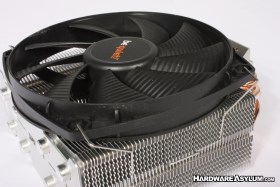 The Shadow Rock Slim comes with a single 135mm cooling fan and is designed for silent running with the aid of the bequiet! SilentWings technology.  The fan is rated at 24dBA @ 1400rpm under full load.  You may notice that the fan uses a different style mounting with the holes located at the center of the fan ring rather than on the edges.  This is likely done to limit fan vibration and incidentally makes it very difficult to use as a case fan.