This year G.Skill is really making a splash with their Ripjaws branded gaming peripherals and today we will be looking at their first entry into the highly competitive mechanical keyboard arena; the KM780.  Our KM780 pairs the popular Cherry MX Brown switches with a LED accented red on black color scheme.

Packed with features and a futuristic look, the KM780 shows that G.Skill has done the research on what gamers and enthusiasts are looking for in a keyboard.  Cherry MX switches, programmable lighting, anodized aluminum frame, and more. Check.

Let’s find out if the performance backs up this promising first effort. 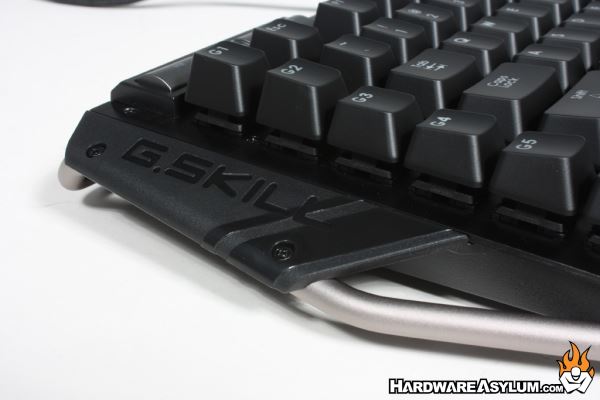 The KM780 series is offered in a variety of different switch and lighting combinations with at least one that is sure to please most gamers.  As of this review, G.Skill offers the KM780 with your choice of brown, red and blue Cherry MX switches.  By default the lighting is what G.Skill calls Crimson Red. Moving from a single crimson red LED to a full RGB layout adds about $30 MSRP.  Other than those two options the boards are functionally identical.

For those willing to give up the extra gaming keycaps G.Skill offers the KM780 in a KM780R Mechanical Gaming Keyboard variation.  This keyboard is otherwise identical but shaves a few bucks off the price while offering the same selection of lights and switches.

Let’s take a look at the specs.

Established in 1989 by enthusiasts, G.Skill is a leading memory module Manufacturer based in Taipei, Taiwan. G.Skill may be known for their high performance Ripjaws branded memory and affordable pricing but these days everyone is diversifying.  Applying the well-known Ripjaws brand to a gaming line of mice, headphones and keyboards is a natural extension.