Rosewill is a brand that nearly everyone in the world familiar with PC’s has heard of.  Arriving on the scene in 2004, they’ve built an impressive catalog of products, most notably cases and PC internals.  Recently, Rosewill has been making a name in gaming circles with their RK-series mechanical keyboards.  The emphasis of the RK-series has always been about providing a platform that’s comfortable, dependable and sturdy to work and game on.  I’ve been on the hunt recently for a new weapon of choice, so I was delightfully surprised to be offered the chance to review Rosewill’s latest offering, the Helios RK-9200 Dual LED Illuminated Mechanical Keyboard.

My initial impressions while unveiling this creation were on the look and feel.  Out of the box, the Helios definitely looks very neat and clean.  The matte finish to the frame and keys looks very professional and is soft to the touch.  There was no bowing or flexing to the keyboard which gives it a sturdy and well-designed feel. 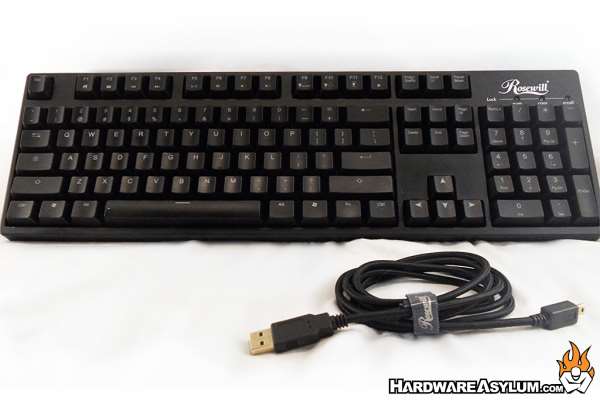 Due to the inclusion of spring-assisted mechanical switches, mechanical keyboards do tend to run a bit heavier than membrane keyboards.  The Helios is no exception to the rule, tipping the scales just shy of 2.6lbs. With the rubberized keyboard pads, the added weight only added to the stability of the keyboard, providing a firm foundation for anything thrown its way.  Obviously, the next step was to plug it in, and light it up!

The dual-LED illumination is the big highlight of the 9200 over prior models, and it did not disappoint.  Each key is individually lit with a dual LED, housed right above the switch.  This allows the entire keyboard to be cleanly backlit in either red or green.  The arrow keys and the WASD keys are also independently lit and controlled separately from the rest of the keyboard, so you can contrast them a different color or leave them lit, even if the rest of the keyboard isn’t.   Aside from the traditional low, medium and high intensity settings, the Helios also has a fourth backlighting setting called Breathe.  This setting slowly pulses the intensity of the backlighting in and out, creating a nice alternative light effect.

The Function key at the bottom of the keyboard really drives a lot of the features of this keyboard.  The lighting, multimedia shortcuts, and gaming mode all make use of the function key, which makes learning how to operate the special features of this keyboard pretty straight forward and simple.  This is good for a lot of the features, since the lack of onboard memory to remember your setup means you’ll be repeating those keystrokes often, but restoration is as easy as two or three key presses.