Someone once told me that there was no excitement in motherboards, citing that motherboard specific technology was slowly moving into the CPU and would eventually make the traditional motherboard a thing of the past.  While processor technology has advanced a lot since the days of the Pentium III Coppermine, the motherboards that power these modern processors are anything but boring.

The most recent Sandy Bridge processor release was coupled with 2 new chipsets, the H67 and P67, both had their benefits and neither shared any features.  This isn't uncommon for a chipset given past examples where a "G' revision supported onboard graphics while an "X" or "P" removed the graphics option in support of higher performance and overclocking.

So what happens when a "Z" is introduced into the mix? Do you get the best of both worlds? Or is this simply a technology refresh that gives the motherboard maker the choice on what they which to support.  In a way both are correct however, as hardware enthusiasts we are not often concerned with this distinction and look for systems to support the best of the best.

In this review we'll be looking at the Gigabyte Z68X-UD7 motherboard which happens to be the current top of the line motherboard from Gigabyte supporting the LGA1155 processor.  Much like the P67A UD7 this board is designed for overclocking and heavy enthusiast usage. 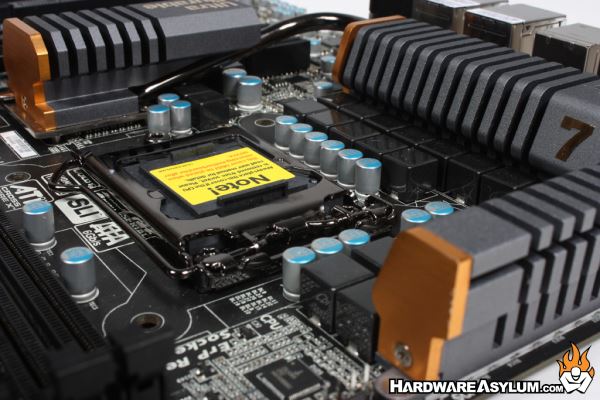 A Proven Overclocker
We have had the honor of using the P67A-UD7 since it was released early this year.  Since then we have used it in every P67 review and even tested the limits of our Core i7 2600K under Air cooling, Water cooling, Chilled Water cooling and even Single Stage Phase Cooling.  In every instance the combo held up beautifully.  In fact the system was so stable that we posted several top ranked overclocks on HWBot including a 5.78Ghz CPUz score and an unofficial 2300Mhz memory overclock using a BCLK speed of 108Mhz and GSkill RipjawsX memory.

Most of these records can be attributed to our excellent retail CPU however none of it would be possible without an excellent motherboard like the UD7.  It was also one of the few motherboards we reviewed that would function at 108Mhz BCLK without killing an onboard component such as the Ethernet or sound controller.

While overclocking results like the ones we just mentioned are beyond the scope of our standard motherboard review we have no doubt that the Z68X can match these performance numbers, if not exceed them, given the recent BIOS enhancements.
Motherboards