In terms of size the Strider Platinum is the same size as a Strider Gold Evolution  and Gigabyte Xtreme Gaming.  These are all 1200w PSUs and are the upsize to the standard ATX PSU at 7 inches deep.  Modern chassis design allows for longer PSU units like this so unless you are doing a retrofit you should have no issues with space. 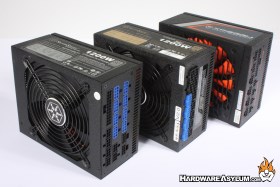 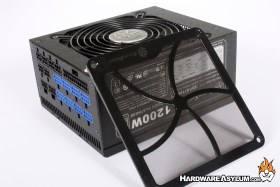 Silverstone includes a magnetic fan filter that may be a little overkill for most modern case installations however, it can come in handy for a retrofit upgrade or simply used over another fan in your case.  The filter material is an ultrafine mesh and while it looks to be transparent it does an excellent job at catching dust.

This is a fully modular power supply meaning that every single cable can be removed including the main 24pin ATX power line.  Silverstone also sells custom cable kits for the Strider Series so they can be used in SFF cases and other systems that don't require excessively long power cables. 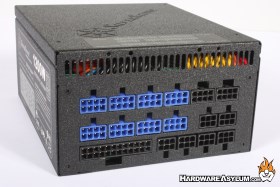 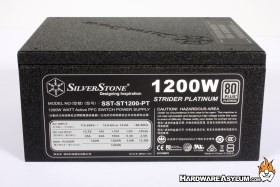 This PSU follows a strict voltage regulation of +/- 3% to curb any power spikes and the same +/- 3% ripple and noise control.  Of course testing these can be difficult but basically this means the power is clean and will prevent any ground loops from causing issues with your components.

The Silverstone Strider Platinum is a single rail design with the 12v rail supporting a 100A circuit with a maximum RMS power output of 1200W and 1250W peak under certain loading conditions.   It would appear that part of the 80 PLUS Platinum certification is a reduction in peak power output.  This could be to ensure power efficiency under extreme load given that the difference is only 50W, at least when compared to a 80+ Gold edition PSU of the same wattage..