The Vapor gaming consoles are available in three different configurations.  The A configuration in this review features a white chassis that can sit flat or on end depending on where you plan to use the machine.  While the chassis is physically the same across the various Vapor configurations the color can change between white and black based on the internals or customer demand.

Across the top of the console you will find a large vent next to an embossed version of the SYBER logo.  The logo is also shown on the front of the case next to three USB ports. 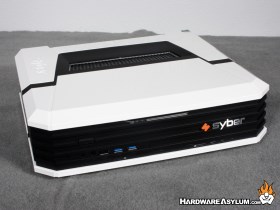 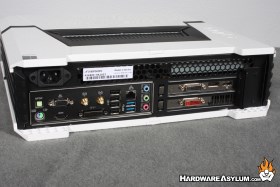 The Vapor A comes with a variety of connectivity options.  In terms of network you have two choices WiFi over 802.11ac or Gigabit LAN using the onboard network port.  Keep in mind that there are also two graphics cards in this system.  The first is part of the motherboard using the AMD APU while the other connects to the discrete R9 270.  Of course the second (on the right) is preferable for the best gaming performance.

Onboard audio is rather disappointing on this motherboard assuming you use the analog plugs.  For those interfacing a Home Theater system the audio over HDMI should be rather good with a few more available channels and digital decoding. 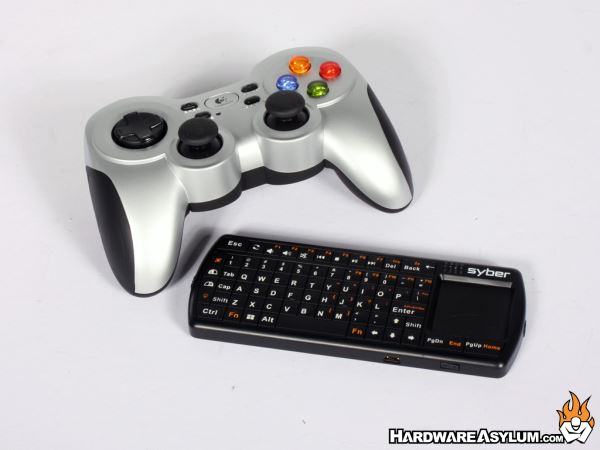 One of the biggest problems surrounding users who want a computer in the living room is controlling the computer.  SYBER Gaming has included this mini keyboard and Logitech F710 Gamepad to reinforce the gaming nature of their console.  The keyboard is too small for any real gaming but works well to input text and control things while on the Windows Desktop.

The Logitech F710 gamepad worked great though did suffer from range issues if you connect the dongle to the rear of the machine.

One of the biggest problems associated with building a SFF system is getting everything to fit and still allowing adequate airflow.   The Vapor gaming systems use a system layout similar to the Zeus Mini where half of the case is dedicated to graphics while the other holds the motherboard and power.  However unlike the Zeus Mini there are very few exhaust fans, like maybe one, and its small, and part of the PSU. 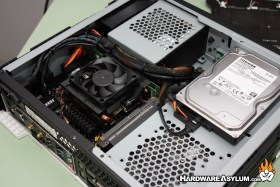 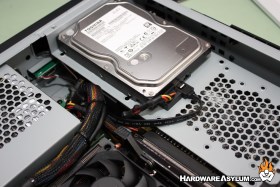 Removing the top of the case exposes the basic system layout.  At the back is the Mini ITX motherboard next to the small SFX power supply.  The entire side opposite of the motherboard is dedicated to the graphics card and storage.  In our review system we have a 500GB hard drive sitting on top of a R9 270.  Contrast that with the Xtreme version where you might have a GTX 980 and 1TB drive in the same location.

Most gaming consoles are designed to be quiet and have carefully engineered cooling systems that strike a balance between noise and cooling performance.  In our testing we found the Vapor A to be quite noisy under normal operation and downright obnoxious under load.  This is due in part to the lack of adequate cooling and the OEM fans spinning up to compensate.  We talked to CyberpowerPC about this and they are working on adding a 120mm fan to help keep the internal temperature under control.