There are two basic styles of overclocking and we distinguish them based on cooling method either being ambient and below ambient.  Ambient cooling is what the majority of hardware enthusiasts do on a regular basis and consists of using either a high capacity air cooler or elaborate watercoling setups to cool system components.  Of course there is a limit to what ambient cooling can do but affords the user 24/7 overclocks with only a minimum of expense.

Below ambient cooling is any method that can drop your system temperature below room temperature and keep it there.  You can get a lot from this style of cooling but is often not practical 24/7 usage due to cost and maintenance.

The focus of this article will be on how to install a Single Stage Phase cooler from start to finish.  Single Stage Phase coolers (SS or Phase for short) are a mechanical cooling system  that uses compression and rapid expansion to remove heat from system components.  Out of the available below ambient cooling methods phase cooling is one of the few that can be used on a 24/7 basis because it uses the same technology found in refrigerators and freezers.   The only major drawbacks are, size, weight, noise, cost and availability.  Because of this most phase coolers are only used for bench style cooling like the one I'll be showing you here.

Precautions
Any time you expose the atmosphere to something cold you run the risk that water in the air will begin to condense.  Common forms of condensation would be an icy windshield, water on a cold can of Pepsi, and even the frost in your freezer.  The only way to prevent condensation is to insulate against it.  Now Insulation in terms of computer cooling is really a misnomer since very few of the items we'll be using have any insulative properties. 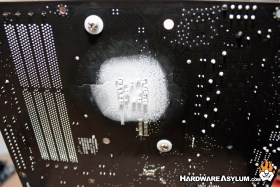 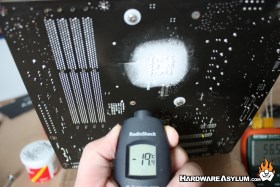 The above photos show what happens to the back of a motherboard after the processor has been subjected to temperatures of -50c.  As you can see a frost circle has formed at the base of the CPU socket showing that extreme cold can pass thru the CPU socket to the back of the PCB.
General Information