Case controls are located on the top of the case in an indented shelf area.  The larger power button on the right is textured for ease of use while the reset button is set back making it difficult to accidently hit .  Both buttons frame a stylish pulsing blue light Thermal take calls the Breath lighting effect.  Ports for eSATA, 2x USB 2.0, 2x USB 3.0 and HD audio are easily accessible from both the front and the top.  As with several of the newer Thermaltake designs, a hard drive dock has been worked into the top with the whole area accented by the two additional lights for power and hard drive activity. 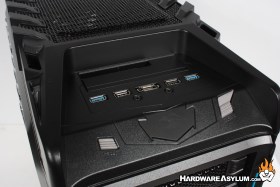 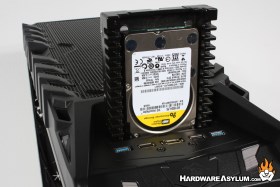 Thermaltake has long been known for their popular BlacX docking station and it's nice to see this technology appearing on more of their enthusiast cases.  This port supports both 2.5" and 3.5" SATA drives in a hot-swap capable bay. Placing the drive is simple though no eject option exists making me a bit nervous about how delicate the connectors are on the WD VelociRaptor drive shown here.

The removable top mesh panel is styled to match the front and provides over 16 inches of mesh.  The design overlaps the front panel nicely and both appear more durable in person. 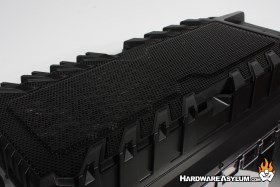 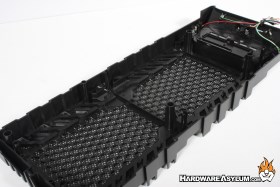 Taking a closer look at the top reveals about 1.25 inch of clearance to allow for the two 200 x 200 x 30mm fan mountings or a standard double size water-cooling radiator.  It's not as roomy as I had hoped but the potential for a radiator is still intriguing.  The entire top panel can be removed thanks to the inclusion of a connector.

Top cooling duties are performed by the single included 200mm Thermaltake TT-2030 blue LED fan.  Operating at 600~800rpm, 13~15dBA.  Both fan mounts will take fans down to a 120mm but a second 200mm fan is the clear choice for a performance build. 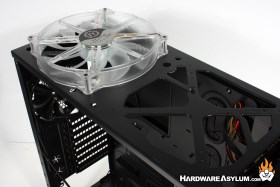 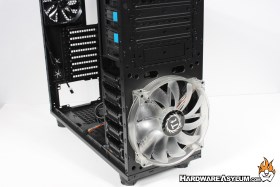 The same 1.25 inch standoff is present behind the front panel but most of the space is taken up by the second 200mm Thermaltake TT-2030 blue LED fan.  There is very little to restrict airflow from the front intake providing nice airflow across the internal drive bays.
Cases