Cooler Master has elaborated on the AIO concept and created a design that promises to be more efficient by separating the pump from the cold plate.  In doing do they have created two chambers, one for the pump and cold liquid coming from the radiator and a hot side for liquid leaving the cold plate.  Visually we have a separated pump and waterblock that just happen to be stacked on top of each other. 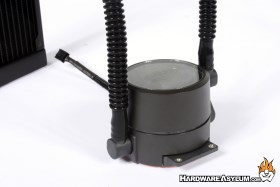 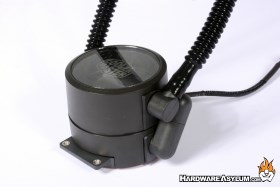 This affords Cooler Master to change how fluid is directed over the cold plate.  The Cooler Master FlowOpt Technology encompasses a skived UltraFine Microchannel block design using a process they call “spraying” the CPU.  In reality this means they are directing coolant down through the center of the waterblock so it can exit out the sides thus increasing flow and heat absorption. 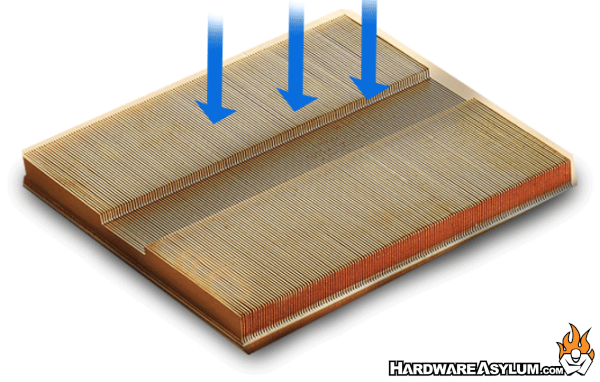 Some of the classic waterblocks used that tekniq and even extended on it with custom jets to match the flow and pressure patterns of the rest of the system.

The heatsink base is machined flat and comes with a brushed finish.  You will see that the copper base is squared off at the size of an LGA 2011 processor and unlike some of the other AIOs I have used a good portion of the block makes direct contact with the CPU. 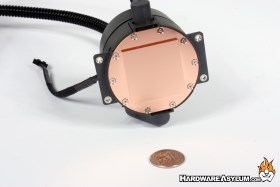 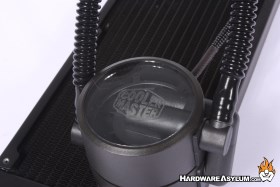 Much to my annoyance the MasterLiquid Pro 240 features the ribbed kinkless FEP tubing which is not only extremely stiff and difficult to position but has a very “plastic” feel and just looks bad.  I suppose there are some benefits to having FEP style tubing like reduced liquid dissipation and longer life expectancy so maybe in the future they can just dress the hoses up a bit.

Most watercooling radiators have been adapted for use in computers.  The first were repurposed automotive heater cores that later became the popular “Black Ice” design that has been adopted as the defacto standard for computer cooling.  While the “Black Ice” style radiator design is efficient it works on the principle of air resistance. 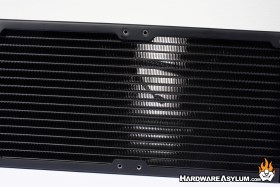 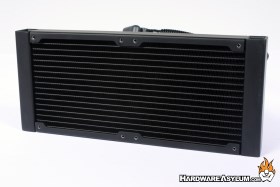 Cooler Master has designed their own radiator for the MasterLiquid Series that takes the standard radiator concept and attempts to improve it by squaring off the radiator fins.  This increases the surface area between the water channel and radiator fin to increase heat transfer.  The one thing I noticed is that the radiator is extremely dense with 17 water channels and extremely small gaps between the fins.  This can have a profound effect on radiator efficiency provided you can get enough airflow. 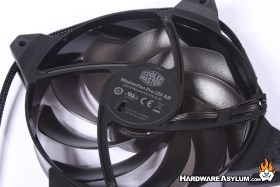 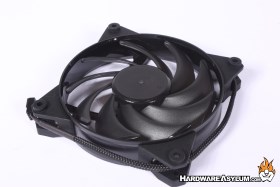 Of course fan performance is a deciding factor when choosing a cooling solution and the MasterLiquid Pro 240 comes with two MasterFan Pro 120mm Air Balance fans.  Each fan moves about 83 CFM @ 2500 RPM with a noise level of 36dBA (at full tilt).   The PWM controller will spin the fans down based on your chosen fan profile and you can further influence this using the built in fan profiles switch.