Looking at the standards in heatsink development you might think that the designs have become rather routine.  First you would start with the type of cooler, typically tower or flat, then decide how many heatpipes and fans to add, seems easy enough.  The truth is there is a lot of work involved to create a heatsink, especially one that performs well and is unique enough to make it stand out from the competition.

In this review we will be looking at a new heatsink from Cooler Master called the X6 Elite.  As the name would indicate this is a six heatpipe cooler in the tower configuration supporting a variety of rather unique features.

We have actually seen this cooler several times at the various trade shows and watched it progress from a barely working prototype to the finished product you see here.   The design didn't change all that much as Cooler Master was committed to make it work. 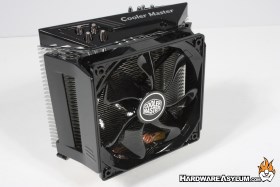 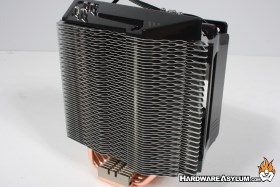 As was mentioned before the X6 Elite is a tower style cooler that is rather raw when it comes to extra body panels.  You will find a decorative cover across the top and some rather unique clips that hold the fan in place and act as a fan shroud.

The radiator features a honeycomb fin structure that serves to direct airflow thru the heatsink instead of across the fins.  This does increase the overall surface area of the radiator without adding too much dimension to the basic radiator package.

Cooler Master has included six 6mm diameter heatpipes in a staggered pattern across the heatsink.  This exposes the heatpipes to direct airflow and helps with thermal transfer.  While some will argue that this isn't necessary we have always seen better performance from similar designs.

Another design feature we look for in a heatsink is additional mass around the base.  The X6 Elite features a thick copper baseplate along with finned aluminum heatsink across the top.  The additional mass helps in total heat capacity allowing the base to store more heat before sending it to the radiator. 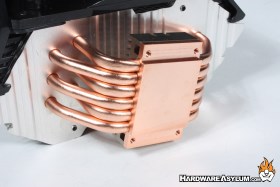 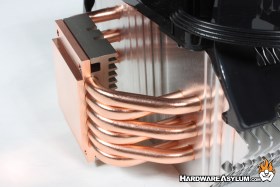 By far the most unique feature of the X6 Elite is its shape.  We already mentioned that honeycomb fin structure gives the radiator more surface area and by rotating the heatpipe assembly Cooler Master exposes a larger cross section of the radiator to the fan.  In fact the radiator is a full 1.5 inches wider than the 6 inch cooling fan it comes with.

As we have seen many times before when it comes to cooling performance the more surface area you have the more heat you can dissipate.  Now this can be used in a variety of ways, for the enthusiast that could translate into better overclocking performance, or to the noise professional that can mean good cooling performance with less noise.  Considering the 9-34dB noise rating of the included fan we would imagine silence is the intended target for this product.
Cooling