When I look at enthusiast hardware I first consider what the designers set out to build.  Is this product designed for overclocking? Or is it more of a mainstream product and if so is the product affordable.  The same questions come up when looking at heatsinks but with a few twists.  For instance, does the cooler offer enough heat capacity to handle overclocking?  And if so, how much heat can it handle.  In this review I looked at the Dark Rock TF from beQuiet!.  This is a Top Down heatsink tower meaning that instead of sitting perpendicular to the motherboard the heatpipes are parallel.

One of the primary reasons for this particular design is to provide users with a high capacity cooler in a lower profile form factor.  More often than not the design offers a good amount of performance at the sacrifice of having a huge heatsink covering every component on the motherboard and preventing easy access to memory modules and even fan installation.

Overall construction is extremely good.  The cooling radiator is made from thicker aluminum which both adds strength and weight to the cooler.  To help lower the overall design height the primary radiator is only about an inch thick with enough room on both sides for push pull fan configurations.  Of course running dual fans will increase performance but running only the lower fan will give you the lowest cooler profile. 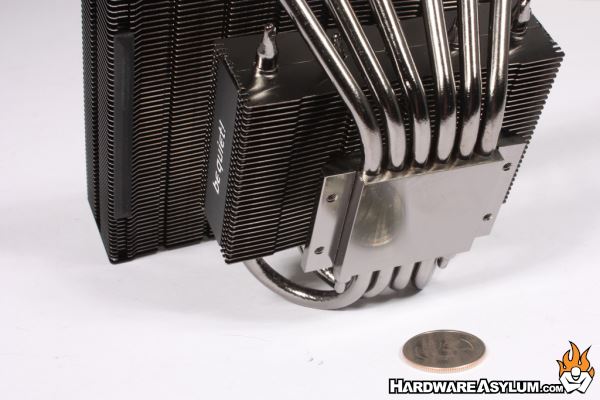 The Dark Rock TF has a advertised heat capacity of 220w and while this is in the realm of LGA 2011 I decided to test on an LGA 115x 2600k.  At 4.8Ghz the system completed the Prime95 heat and stability tests but failed them when the system was overclocked to 5Ghz.  While the total heat output was less than 200w we found that spikes in core temperature were causing the stability issues and preventing the test from completing.

That isn’t to say the cooler doesn’t support 200w+ but does indicate that reactions to thermal changes was quite slow and didn’t support small core processors very well.

Installing the heatsink was pretty straight forward and was using an older set of beQuiet! hardware that required building a heatsink base using screws, clips, cap screws and large nuts.  The actual installation process was somewhat cumbersome given that the space between the radiator and motherboard is quite small.  On the positive once you get everything tightened down the mechanical connection is very strong and not likely to break or bend without some serious help.