In the package you will find everything you need to install the Dark Rock TF including mounting rails for all of the major processor platforms, a universal back plate and thermal paste.

We will be testing on the LGA 1155 Sandy Bridge platform and will need to build up a mounting base to install the cooler.  The installation method is still rather cumbersome and full of extra steps but once you get the cooler installed it is locked on and very solid. 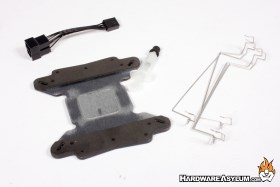 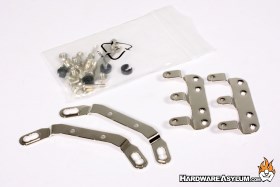 The first step will be to orient and install the backplate assembly and to secure everything in place.  The backpate can only be installed in two positions so make sure the CPU socket mounting screws align with the voids on the backplate. 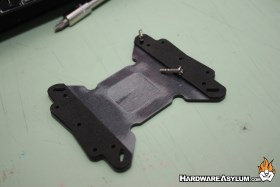 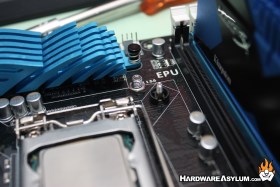 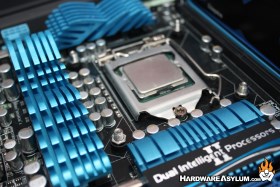 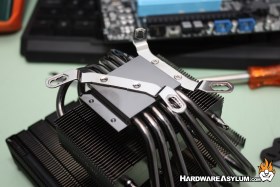 Next, select the proper mounting rails and secure them to the heatsink using the supplied screws. These are quite small so be careful.

At this point you are ready to install the Dark Rock TF.  Start with thermal paste, we prefer the 5 dot method because it spreads well and will conform better in the event that either the processor or heatsink isn’t sitting flat. 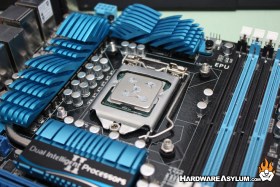 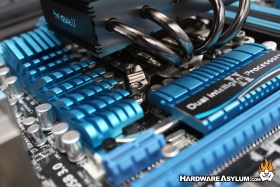 A common complaint I have with the beQuiet! mounting system is how the heatsink is secured to the motherboard.  Instead of using clips or center mounted screws you must basically bolt the cooler down at each of the four corners.  Not only does this have a tendency to introduce un-even mounting pressure but is next to impossible to do while the motherboard is in a case.

Compound that with having to use tools on both sides of the motherboard and you may start spewing expletives. 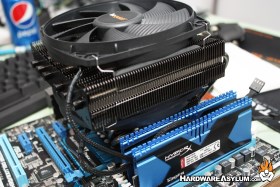 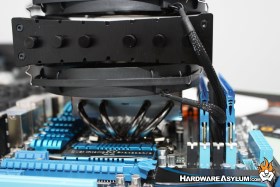 The Dark Rock TF might be a low profile cooler but, when it comes to overall surface area it is large like the Dark Rock Pro 3 and doesn’t give you much room to get in and secure the heatsink nuts or even mount the fans.

In our case we used some rather tall HyperX DDR3 modules and found them making contact with the Silent Wings fan.  Had we used more than two modules there would have been some major clearance issues.  On the positive standard height and typical high-performance memory should fit without issue.

Don’t forget to hook up the fan headers and you’re done.