The biggest challenge when it comes to enthusiast system builds is deciding what cooling solution to use.  While many of us desire the power of watercooling there are times when it is simply not feasible.  In times like these it is best to look for a high-end aircooler and hope it can handle the heat loads you are looking to produce.

The majority of tower style heatsinks can handle about the same amount of heat before they become saturated.  As we have seen from our other reviews the tipping point is right around 200w and is highly dependent on heatsink design and fanspeeds.

In this review we will be looking at the Thermaltake FrioOCK which happens to be the high powered upgrade to the popular Frio that we reviewed last year.  The Frio ended up as a contest prize and we have been looking for a suitable replacement ever since. 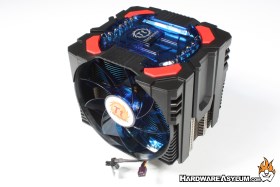 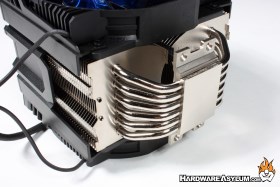 On the surface the FrioOCK looks like a typical tower heatsink with two 130mm fans on each side.  The fans work in a push pull configuration for the best airflow.

The FrioOCK features six 6mm heatpipes spread across the base with a micro texture that promotes better thermal paste distribution over the IHS.  You can also see that there has been no attempt to stagger the heatpipes as they enter the radiator.  By doing this you achieve better airflow which should translate into better cooling with high speed fans. 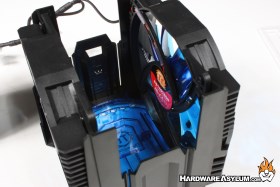 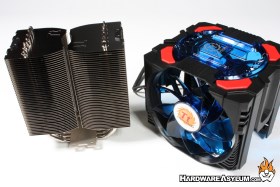 To install the OCK you must first remove the fan assembly which also exposes the heatpipe radiator array.  A unique feature of this heatsink is how the tower is actually split into two sections giving us a thermal separation between each end of the heatpipe.
Cooling