There are a few trends in the computer hardware world that have helped define how manufactures build and market their components.  For instance, "gamers" are often grouped in with hardware enthusiasts and treated with the high-end and often halo line of products.  These often feature oversized everything from onboard cooling solutions, outrageous colors and excessive electronics allowing this group to push the limits of their hardware.  The mainstream users are treated to down market hardware as they rarely care about things like overclocking or color matching off the shelf components with the perfect LED fan but, they do seem to care about features.  While most will never expand their PC and yet like the idea that they can.

Then, you have the silence is deafening group.  Early in my career as a hardware reviewer I often associated "silent" components as those designed for Europe.  At the time I theorized that due to the smaller homes and different lifestyles the valued a powerful computer but, didn’t want it to make too much noise.  While this concept makes sense to me, I had trouble putting that hardware into a group.  Silent cooling solutions is not high performance and mainstream users (in the US) may comment about computer noise but never complain about.

This creates a very unique group with special needs that your standard component maker cannot always deliver to. 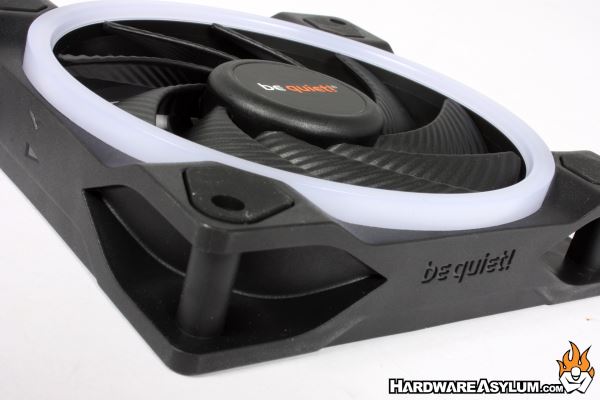 This is where companies like bequiet have made a name for themselves by developing computer hardware components that strike a balance between noise generation and overall computer performance.  Their coolers are some of the few that advertise accurate TDP ratings so you can properly match a cooler to your build and also make some extremely impressive power supply units.

The only thing missing from their lineup is color.  Every component is black with an occasional accent color just to show how hip the bequiet company can really be.

That is until now. 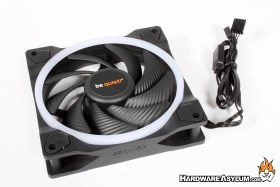 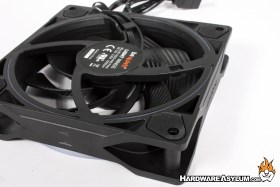 bequiet fans are easily disguisable by their unique blade design.  Across both surfaces are a series of ribs that claim to increase efficiency and reduce turbulence which are important factors in a silent fan design.  More detailed inspection will note a unique blade shape that increases the overall surface area and some interesting compression shapes where the blades come close to the outer ring. 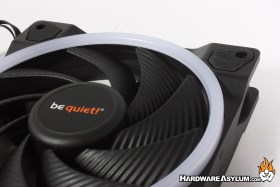 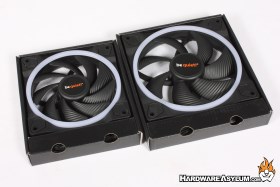 As you likely know, fans are designed to move air and the shape and size of the fan blades will determine how much air can be moved.  With an axial fan, typical of computer coolers, the variable in this equation is how fast you spin the motor.  To move more air, you simply spin the fan faster with the drawback being increased noise.

Each Light Wings fan is designed to maximize efficiency by setting the fan RPM based on usage.

The standard PWM version is designed for case cooling and only comes with 7 blades and a Noise level of no more than 23 dBA.  120mm fans offer a maximum of 41CFM at 1700rpm while the 140mm version can push 56CFM at 1500rpm

High Speed PWM designs can deliver increased performance and are designed for Coolers, Radiators and other situations where more airflow is needed. 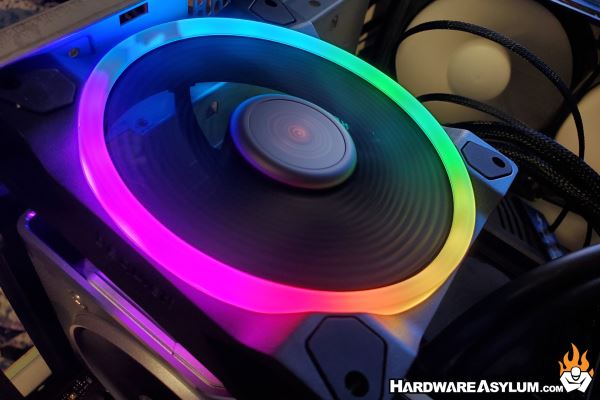 Of course, what makes these fans unique is the single 20 segment ARGB light strip found in each fan housing that is accented by a very bold diffuser.  Light from these fans is visually segmented but blends nicely allowing you to clearly see individual color differences and yet not see any individual light as they put on a show.

While the top of the fan is intended to show off the majority of the ARGB lights you have the option to view the LED lights from both sides of the fan housing.  In my opinion viewing the lights from the exhaust side of the fan is the preferred option. 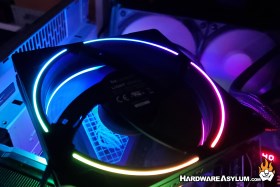 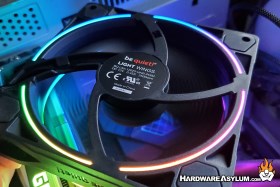 As a hardware enthusiast the Silent Wings and now Light Wings fans have always amazed me.  They are weak when you compare them to more traditional fans and yet always seem to out perform them in basic performance tests.  When used on heatsinks and radiators you can barely tell they are working and somehow deliver similar performance to the faster and louder versions that are supposed to be better.

Despite the performance advantage the bequiet designs never really stood out.  For a silent fan design this is a good thing. that is, until it isn’t and the Light Wings fan design should change all of that.  As mentioned, each Light Wings fan features a 20 segment ARGB LED strip making them fully compatible with any ARGB light source.  These lights can be daisy chained and if you happen to buy the 3-fan packs you get a 6-fan ARGB light hub allowing you to fully synchronize lighting effects without the lag typically found when daisy chaining LED strips together. 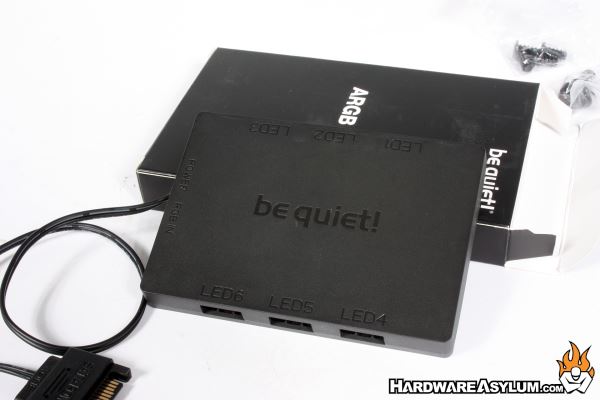 While I do feel the innovation of the Light Wings ARGB LED implementation to be very simplistic it does achieve the goal of adding LED lights to a fan and done so in a very tasteful manner.  Unfortunately, with these fans you only get light along the outer ring with no light reflecting off the fan blades or glowing from the central hub.  I suspect this was a design-oriented decision from a reluctant product manager who agreed to add ARGB but didn’t want the lights to overpower the elegance of the fans.

Eventually they will learn and, until then enjoy some awkwardly implemented and nicely accented ARGB fans that can provide you with a surprisingly efficient silent cooling solution.