We have mentioned several times how heatsink design can have a profound impact on overall performance.  Some designs are configured for silent operation using larger radiators and silent running fans while other designs are looking for the best performance possible using high pressure fan designs and extra large heatpipes.  Rarely do both of these come together without having to sacrifice something to attain your ultimate goals.

In this review we will be looking at a new heatsink from Silverstone called the HE01.  The HE01 is a little different since it combines several prevalent design ideas into a single product in hopes of getting the best of both worlds. 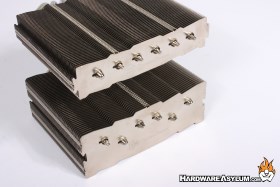 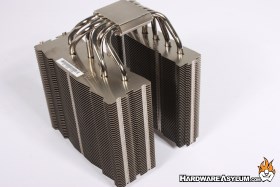 The Silverstone HE01 is a dual tower heatsink built on a 6 heatpipe design.  As we all know heatsink performance is largely based on how fast you can move heat from one place to another.  In the case of air cooling, a fan is tasked with moving air across the heatsink to start the thermal transfer.  The more surface area you have, the better the heat transfer.

A minor addendum is to consider the size of the radiator.  The HE01 features a special asymmetrical configuration to each of the radiators.  One tower is rather thin measuring in at around 30mm and features a horizontal array of heatpipes.  The second tower is considerably wider at 50mm and features a staggered heatpipe configuration.  Together the total width and surface area is only slightly more than single tower design so, what makes the HE01 so special?

In a word, Airflow.

The gap between the radiators will accommodate a special 38mm Silverstone cooling fan capable of moving 171CFM of air spinning at 2000rpm.  If that wasn't enough you can install two more 120mm fans on each side and increase the total cooling capacity of the HE01 to levels immeasurable by the specs alone. 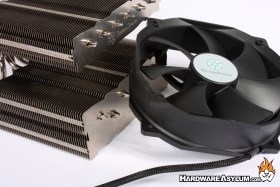 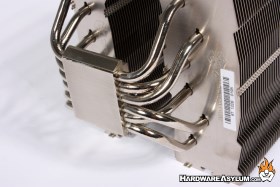 The heatsink base is machined flat and features a horizontal micro texture that appears to be left over from the machining process.  The micro grooves do an excellent job at removing excess air from the thermal paste and promotes good adhesion to the heatspreader.  If your heatsinks don't require a little force to remove them then you didn't make good contact.
Cooling