Building your own computer can be fun and rewarding.  It all starts with the challenge of picking the perfect combo of gear followed by the thrill of buying exactly what you want.  The only thing that can dampen this party is compatibility.  Picking processors, motherboards and memory is rather straight forward, simply match up the numbers and away you go.  However, choosing an aftermarket heatsink based on performance numbers alone doesn't do you much good if you don't have proper clearance.

In this review we'll be looking at the NiC F4 heatsink from Thermaltake .  The NiC (No Interference Cooler) is designed to be a full tower cooler that won't interfere with any onboard components including extra tall memory modules.   Self contained watercooling units have eliminated this on high-end systems but for the casual system builder and OEM the balancing act of performance, size and price still play a major factor in the decision making process. 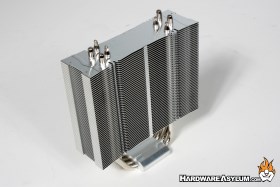 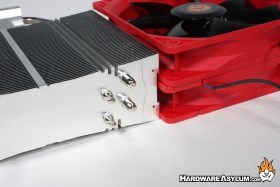 One of the first things you will notice is how thin this cooler is.  As you can imagine the area between memory banks on the Z79 is quite small and after factoring in 50mm worth of fans you are left with about that in radiator space.

The NiC F4 is a U-shaped four heatpipe cooler with the center of each pipe passing over the CPU.  Heatpipe placement is staggered to provide a concentrated contact patch.  All of the heatpipes are positioned well in the primary airflow for the best cooling performance. 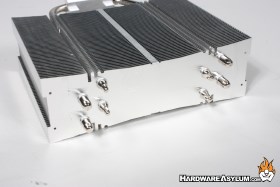 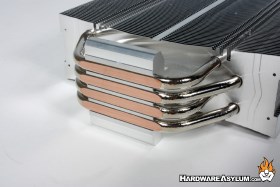 Heatsinks make contact with the CPU in one of two ways.  The first is traditional where a cold plate is used to collect and distribute heat to the radiator while the second is a "core-contact" design that exposes the heatpipes directly to the CPU.  Each design has distinct advantages and a few disadvantages depending on how you plan to use your system.  The NiC F4 is a core contact design and should react quickly to changes in heat load but may have a limited heat capacity.

Many core contact designs also suffer from gaps in the metal where the heatpipe meets the mounting hardware.  This gap is generally filled with thermal compound and offers no real thermal transfer from the processor. 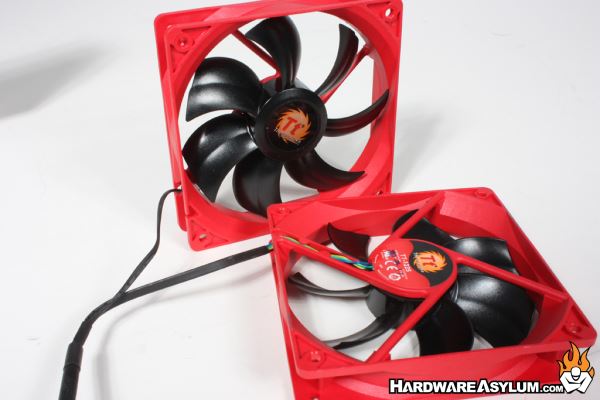 Included with the NiC F4 you'll find two red framed 120mm cooling fans that move 79CFM under full load with around 30dBA.  Both fans are PWM enabled allowing enhanced control at the motherboard and attach to the heatsink using wire clips.
Cooling