There are several things to consider when looking at a self-contained watercooling system.   Performance and price are always seem like the most important factors but when you consider that most watercooling units all follow a similar formula it is nice to see something different.

The Thermaltake Toughliquid 360 ARGB is a pretty basic heatsink that comes with a number of interesting features.  On the surface the pumpblock features a built in ARGB controller allowing you to simply connect power and go.  If your system supports ARGB you can bypass the internal controller and sync the lights with your existing ARGB hardware.  Of course, DO NOT hook up both sets of wires as that can lead to an embarrassing RMA discussion that will likely get denied. (so, don't do that) 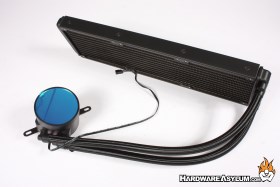 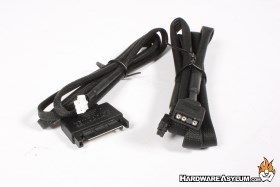 On the top of the pumpblock is a fancy mirror.  Now, putting a mirror on your AIO cooler isn’t a new feature and I have reviewed at least one other cooler that has one.  Of course, the mirror is a nice gimmick and hides a screened version of the TT logo that is illuminated when the ARGB is activated.

The top can be rotated so that the logo is always positioned how you want it and even allows those evil enough to tweak the logo slightly and get all the social media attention.

There are a number of built-in ARGB effects so even if your system supports ARGB sync you can tweak the AIO lights to do their own thing.  Unfortunately, the Toughliquid only features ARGB on the pumpblock and the included Toughfan 12 120mm fans are just your standard air movers.

During my testing I discovered that the Toughliquid can handle a fair amount of heat and while our calculation indicated a 175w total load there is more heat that could be generated from Prime95.  So much that anything above a stock frequency would cause the CPU to throttle and sometimes crash the system.  Despite this the loaded C/W values looked very respectable and should translate well to a processor platform that handles overclocking better than the 10th-Generation Intel.

To wrap things up I am a little conflicted.  The Toughliquid 360 ARGB does exactly what it is supposed to do and works extremely well at keeping a CPU cool.  However, it does not bring anything special to the table.  Sure, it comes with a new set of Toughfan 12 fans but, their implementation could be much better and really should have been ARGB enabled.  The mounting hardware is extremely cheap and while it works it could have also been done better with proper universal parts.  A good example of this is how the backplate had support for LGA 775 sockets which are not supported in the documentation.

Personally, I’m not a fan of the mirror on the top of the pump block.  It might look elegant and be a nice gimmicky way to show the TT logo but that design was played out a long time ago and, honestly, how often is your custom gaming PC with a tempered glass side panel off so you can see the mirrored top on your custom AIO??