If you have made it this far it’s probably because of the Silent Cherry MX technology.  Thanks to the no frills design, the G80 really depends on these new switch types to bring you onboard.  Let’s take a closer look at the Cherry MX Silent Blacks. 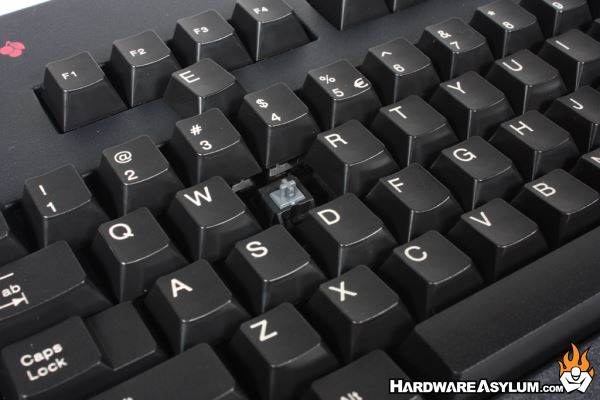 A quick look at the Cherry MX spec sheets shows us there are two different looks for the Silent switches.  With the key cap removed you can see the G80 ships with a solid black housing and a grey actuator more reminiscent of the Cherry MX Grey switches.  The RGB variant has a clear housing with a black actuator.

With the CHERRY MX Silent Black switch Cherry has taken one of the most popular switches and toned down the famous clicking.  This silent version of the Cherry MX Black can be found in both the default variation found in our keyboard and in a RGB version pictured above featuring 16.7 million color variations.

The difference between a normal Black switch and the Silent variation is a rubber pad silencing pad inside the glass fiber reinforced base that softens the click of the keystroke bottom-out and top out noises.  The end result is a sound that reminds me of a good membrane keyboard.  The sound is there but it will no longer make you the office pariah!

In addition to the standard benefits of the Cherry MX switch line, the Silent Black offers the following benefits: