The Kone is an 8 button mouse if we include the oversize tilt wheel and is finished in a two tone black.  The outside surface is smooth with a tactile finish ROCCAT calls their Soft Touch Surface.  It's hard to describe but the feel is noticeably smooth and soft to the touch without being a distraction.  All 8 of the buttons are a large easy to find size and placement is intuitive to the touch.

One noticeable change is to the wheel design called the Titan Wheel.  Featuring 24 steps per cycle the new wheel design includes a 720° per second polling in both directions with a 3Kg push force.  The recessed nature of the previous Kone wheel made it a natural resting spot for dust and grime often resulting in some erratic behavior.  The fix was simple but an updated design is a welcome comfort.  On the Titan Wheel design the grip feels sure and the action is predictable.

ROCCAT has also updated the logo to a more silver outline of the company’s mascot.  Along with the XTD markings these are the only real external differences. 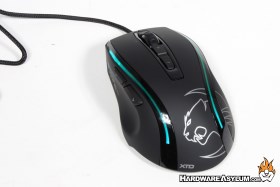 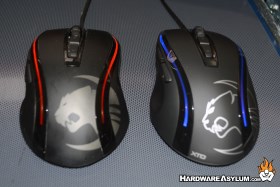 Of course the XTD retains the most striking visual element from the Kone series, the programmable 4 LED lighting system.  It's a system unlike anything else on the market (and probably the reason there isn't a wireless variant).  Each of the lights can be programmed to light up, pulse are change color over a broad spectrum of colors.

With the lights dimmed (and a bit of a soft exposure) you can compare the two generations of Kone mice side by side.  On the left, the Kone (+) softly pulses through the entire spectrum getting caught here as the red fades in.  On the right the Kone XTD displays a solid blue caught during the heart beat effect more representative of something from Tron.  Rest assured you will find something you will love in the color tool box.