With the relatively recent launch of the AMD Threadripper 3 and Ryzen 3000 CPUs it is important to remember that total system efficiency is not dictated by raw processor speed or how fast your SSDs are but rather how quickly it can process information.

In the past enthusiasts would go to great lengths to overclock a CPU or RAID a number of hard drives together because those gave you the largest performance boosts.  With the prominence of multi-core CPUs we have reached a plateau of CPU performance that has created extremely large processors where boost clocks to give the illusion of overclocking.  Given that these platforms have become thermally bound the boost clocks only apply to a select few cores as a way to increase performance while staying below their thermal limit.

For this review I’ll be looking at the Crucial Ballistix Elite DDR4 memory modules.  The modules featured in this review come as a 32GB quad channel DDR4 memory kit running at 4000Mhz with a CAS latency of 18.  When these modules launched they featured the highest clocks in the Crucial Ballistix lineup supporting all of the current DDR4 motherboard platforms.  Be sure to consult your motherboard manual for what speeds have been qualified with your system as that will determine which modules you “should” buy over which may not be fully supported. 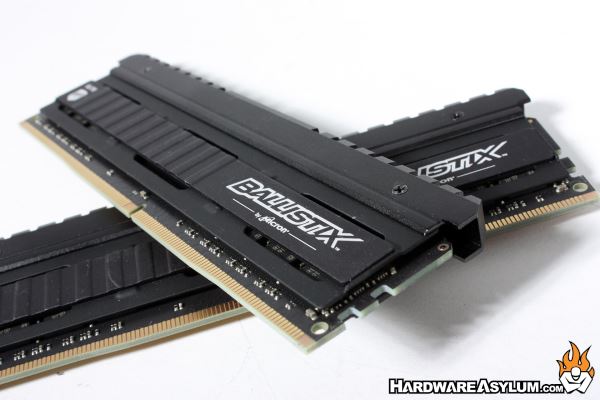 Crucial is a well-known name in the memory world and is the primary retail outlet for Micron memory.  For years Crucial has been the brand to buy if you wanted 100% compatibility which they achieved by owning the JEDEC region of the memory market.  This translated into modules that were fully supported by Intel and AMD at speeds that could guarantee to have a long and stable life.

The Crucial Ballistix gaming brand has typically taken Crucial memory modules and added enthusiast friendly features like LED lights and heatspreaders but rarely offered anything in the overclocking space.  This has changed with the launch of DDR4 and their transformation started with the Ballistix Elite 3600Mhz and an overclocker who goes by the name OGS.  OGS was experimenting with the Micron E-Die memory and discovered he could set a frequency record using the Elite modules.  This record served as a stepping stone that not only put Crucial back on the performance map but also sparked the company to create even faster modules and use the recognition to their advantage.

We covered the latest OGS memory frequency record, Micron Insite 2019 and the Crucial Ballistix Elite memory featured in this review on the Hardware Asylum Podcast Extra Episode 106.  Be sure to check it out.