This last Computex I got to see the new generation of overclocking memory from GSKill called the TridentZ.  As far as memory goes the Trident series is considered the best memory for extreme overclocking, not so much that they can be overclocked more than a standard set of memory but rather that they are available in higher speeds which give you better out of box performance.

In this review I’ll be going over the F4-3466C16D-8GTZ TridentZ memory modules.  This is a 6GB dual channel DDR4 memory kit running at 3466Mhz with a CAS latency of 16.  Currently the X99 and Z170 platforms are the only platforms requiring DDR4 memory and while the modules are interchangeable the top in frequency support is a little different.  Skylake (Z170) can better support memory speeds faster than 3200Mhz while the Haswell-E (X99) runs best around 3000Mhz.

Something to remember if you are in the market for DDR4. 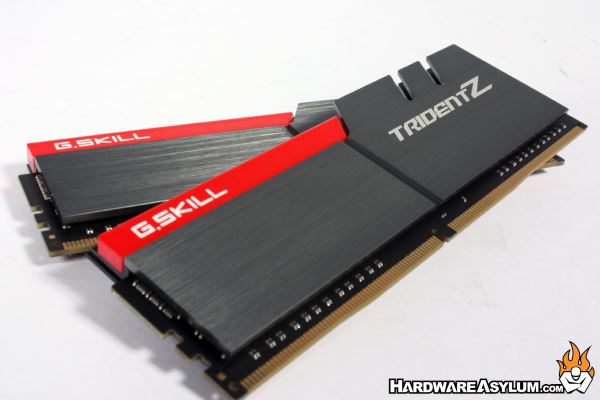 The Trident memory series is a premier memory brand from GSKill designed for those who want the best performance and the highest quality modules you can buy.  While it would be difficult to judge this purely on hardware the available speeds and densities tend to speak for themselves.

As of this review GSKill has TridentZ modules in capacities up to 32GB with speeds ranging from 2800Mhz all the way up to an unheard of 4200Mhz!  The modules in this review would be considered middle of the road which is still 1333Mhz FASTER than the default speed suggested by Intel.