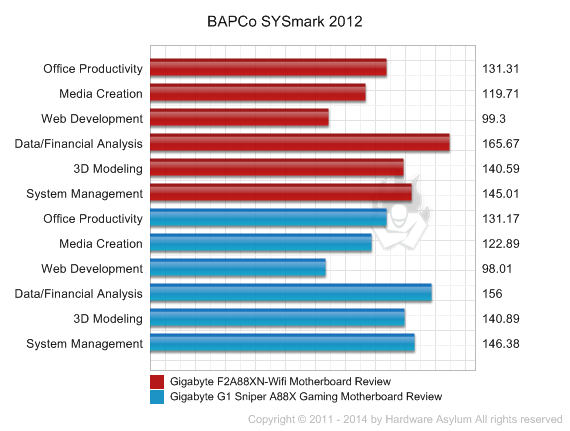 Our real world benchmarks are designed to illustrate a cross section in performance that covers gaming, video encoding, content creation and everyday office applications.  The results are pretty straight forward and as we had mentioned eariler an AMD APU is quite a bit slower than a high-end Core i7.  For instance in our Bapco test a Core i7 4770K will score around 245 and a Core i7 3770K will score 20 points less.  Our A10 6800K running at 4Ghz+ was only able to post 131 which is a little over half the performance.  Granted an APU has no Hyperthreading and memory bandwidth is about half that of the Core i7 so the numbers do correspond.

You will likely have noticed that gaming performance is quite a bit better on the F2A88XN over the reference system.  Reason for that? Drivers.  NVidia released updated drivers that also increased system performance.