As with all of our reviews, we pit the default speed system against the overclocked one in a head-to-head byte match.  The effective overclock for these tests is 4.9GHz @ 48x multiplier and 103 BLCK.  The results are show below.
CPU-Z 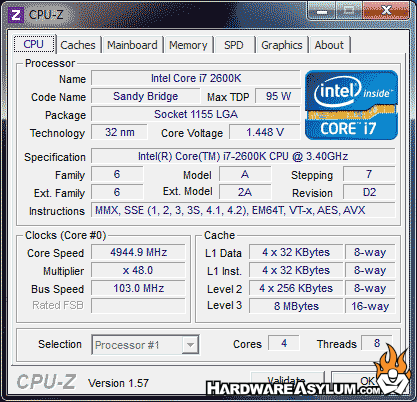 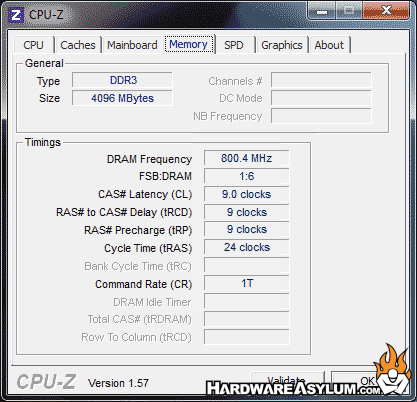 Overclocking Conclusion
Overclocking the Sandy Bridge architecture is a little different from what we are accustomed to, in fact the process reminds us of the old days when the only option was to hack the system to adjust the multiplier or hotwire the system clock to raise the frequency.  In doing so there was also a good chance your attached devices would stop working.

Depending on the quality of your motherboard raising the BCLK can render some devices unless which would usually trigger a failed overclock.  With the Rattler we were not able to raise our BLCK above 104Mhz despite knowing that this particular CPU will run 108Mhz on air.

Overall our overclocking experience was not that enjoyable, in fact it was a rather tedious and time consuming.  Unlike with most P67 motherboards to overclock the Rattler you need to adjust each of the core multipliers individually instead of using a single base multiplier adjustment.  We also couldn't adjust the system clock (memory clock) beyond the 1600Mhz default due to issues with the board auto adjusting the memory timings.  We did try to manually set these with no real success to speak of.

On a positive note the O.C. button worked great and allowed us to adjust the BLCK from within windows but since it adjusts at 1Mhz intervals it wasn't very useful for system tuning.  We do hope that Foxconn refines the O.C. button design by maybe including more than just BLCK adjustments.  Something like hit the OC button 3 times to activate multiplier adjustments or twice for system clock. etc.
Motherboards