The biggest limitation to storage performance is the interface.  Some can argue that the device also carries some inherent limitation but even the fastest device will be bottlenecked if it cannot transfer data quickly enough.  This is why RAID was an important feature back in the day and why PCI Express based SSDs are starting to take over.

In this review I’ll be showing you the Samsung Pro 950 M.2 NVMe SSD.  This is a first of its kind and combines two excellent technologies on a single chip.  The first is M.2 which is a small form factor PCI Express expansion slot with 4x lanes of bandwidth followed by the popular NVMe storage interface.

Earlier this year Intel launched two Enterprise SSDs using NMVe.  These drives have become an instant success from their synchronous reads alone and have since gotten everyone excited to be on the NVMe train.  The real question, is a M.2 NVMe drive faster than a straight up M.2 PCI Express drive?

Let’s find out in this Samsung Pro 950 Review. 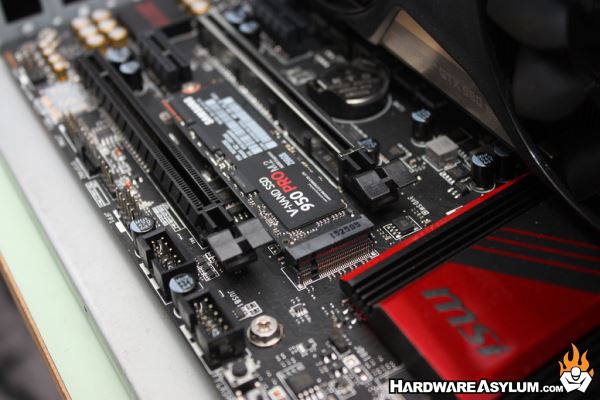 NVMe or Non-Volatile Memory Express is a SSD specification for drives connected directly to the PCI Express bus.  They work much like a standard SSD but take advantage of low latency parallelism of PCI Express and allowing the SSD drives to move data extremely fast by splitting up the transfer over different paths.

The thing to keep in mind is that NVMe is simply a specification with some real benefits to how storage is handled.  SATA and IDE were specifications designed for rotational drives and worked well with the limitations of the traditional HDD.  While the interface works on SSDs the interface has proven to be inadequate for Solid State Drives and needed to be changed.