Modern chassis design has allowed the system builders the freedom to decide how they want to install their gear and ultimately the option to dress up their installations in the process.  The most notable of these features is with cable management and the art of hiding extra wires to improve cooling and make things look nice and pretty.

Boutique builds like the Gamer Xtreme 4200 are custom by nature meaning that all of the cable management is done by hand and will change depending on overall system configuration.  Looking thru the case we can see that all of the cables are routed quite well with the majority of the wires being hidden from view. 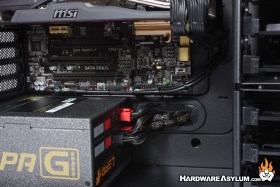 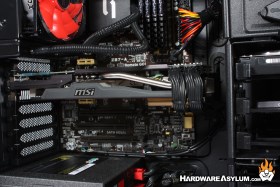 All of the cables you do see are as they appear from the PSU manufacture and aside from the fancy black zip ties there has been no effort to dress up anything.  Given that the Enermax Hoplite is a windowed case there has been extra card taken to make sure the exposed power wires are neatly tied with minimal wires showing.   This attention to detail has been taken to extreme levels considering that the PCI Express wires were pulled so tight that the card was almost bending under the stress.

Of course all of those extra wires have to go somewhere and by removing the other side panel you can get a glimpse of what was done to hide those wires from view. 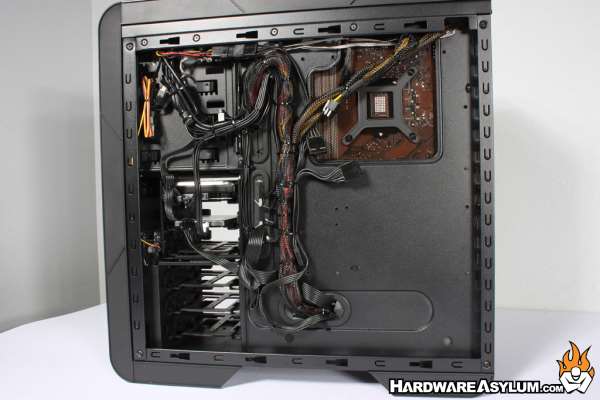 Great care was taken to align all of the wires into common runs so to minimize clutter.  This has the benefit of making the wiring look professional and clean and yet there is a downside.  If you happen to need access to one of the wire bundles there is a whole bunch of zipties to clip and then reattach later.  Wiring like this also tends to put extra stress on the components making it difficult to remove at a later time.

None of these are life threatening to your system  but does indicate that the workman was very confident in their work and that wiring jobs, like this, have become routine

We would like to remind everyone that writing on the backside of the motherboard tray is not all that exciting considering that nobody should be looking back there after the system has shipped.  The only thing we have to criticize is the large bundle running down the middle of the chassis.   Had this bundle been separated there might be a chance to install the side panel without invoking the classic "overstuffed suitcase" trick and having it look bowed out when assembled.
Systems