Despite the size of the ACX 2.0 Cooling solution there are only 4 screws holding the cooler to the PCB and two power connections  Four spring screws around the GPU hold the cooler in place and Removing these will allow the ACX to be removed and expose the components below. 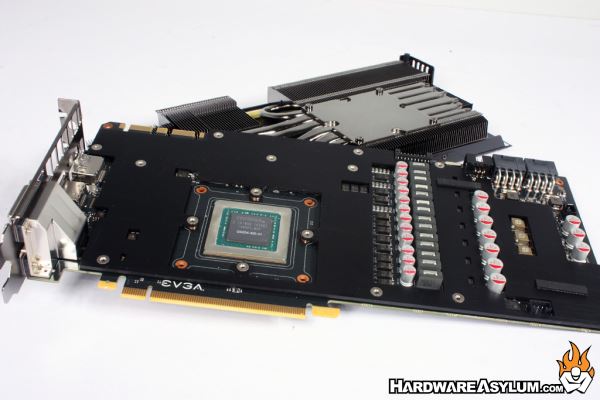 The EVGA ACX 2.0 cooling solution is a heatpipe based cooler comprised of six nickel plated heatpipes radiating from a single GPU cold plate.  One of the reasons this cooler is so efficient stems from its dedication to keeping the GPU cool while the underlying heat spreader is handles the lower power components like the VRM and memory chips.

Unlike some of the competitor cooling solutions the ACX cooler is configured to cool in stages.  The primary stage is the fan located directly above the GPU, this is where the bulk of the heat travels and happens to be the hottest part of the heatsink.  Once that side becomes saturated the longer pipes located over the PWM take over and start removing the excess heat. 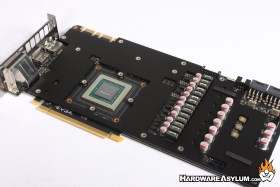 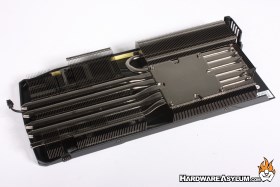 For those wishing to watercool you have two basic options.  The first will be to leverage the stock heatspreader and install GPU only waterblock.  Another option would be to look for a custom full card cooler like the one from EK which replaces all of the aircooling gear and provides direct chip cooling.  Given the unique PCB design the full coverage option would be the better solution especially since EVGA hasn’t launched a Hydro version yet.

LN2 cooling can be accommodated either by removing the heatspreader or by modifying it slightly to remove the bulk around the memory chips while leaving the VRM portion in place.

One of the factors limiting how much a video card can be overclocked is the size of the reference VRM.  Due to the lower power requirements Nvidia determined that a 4-phase design would be enough for a standard GTX 980.  A hot-clocked video card often pushes the limits of a reference VRM and is why the EVGA GTX 980 Classified comes with something a little different.

You will find a total of 14 power phases on this video card with some dedicated to the GPU and others tasked with providing power to the memory and PCI Express.  As you can imagine each of these power phases comes with a voltage adjustment however, GPU voltage will be one of the most important for raw performance. 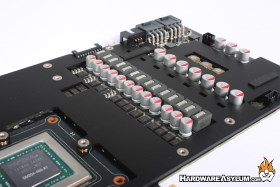 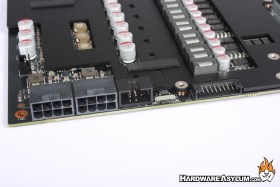 Speaking of voltage you can check actual card voltages using the test points located along the top of the card.  Test leads are not included but can be purchased from the online EVGA store or sampled from most EVGA motherboards like the Z87 Classified and X79 Dark.

Near the voltage test points you'll find a triple BIOS switch allowing you to choose between the different BIOS images.  The 980 Classified comes with a stock hot-clocked image and secondary BIOS with a higher power target and extended overclocking performance.  An EVBot connection is also available and works well if you plan to overclock this card using LN2.  Software voltage tools are available so unless you need to adjust the PWM frequency and load lines you shouldn’t need an EVBot to get the most out of this card.